A new standard in sports memorabilia is expected to be established in September when The Goldin Auctions Great American Trading Card Auction offers for sale 50 high-value trading cards. The event will be headlined by the famed 1909 T206 White Border Honus Wagner PSA EX 5 (MC) specimen, which is widely known in the hobby industry as The “Jumbo” Wagner. Wagner’s fame as the greatest shortstop in baseball history, the incomparable rarity and exclusivity of the card, and the story behind it combine to make this baseball’s most famous collectible. The card will be on display at the Goldin Auctions booth (Booth #840) at the National Sports Collector’s Convention in Atlanta City, NJ from August 3-7.

“Serious collectors understand that every time a card like this is offered for auction, it may be the last time for a long time,” said Ken Goldin, Founder of Goldin Auctions. “The excitement that the auction of a T206 Wagner generates, coupled with the current booming market for high-grade trading cards, creates the perfect storm for establishing a new standard for sports memorabilia. With the tremendous increase in value of key trading cards, and influx of new collectors, the market has been clamoring for a high grade Wagner to come to market. We are pleased to offer one of the three highest graded examples and what many people consider the most desirable.”

The “Jumbo” Wagner was most recently offered for public sale in by Goldin Auctions in April, 2013 where it fetched $2.1 million — the highest price ever paid for a trading card at auction. It’s been more than 15 years since any of the other high-grade Wagner’s were sold in a public sale. As a result, industry experts believe the timing is right for yet another record, not only as the highest public trading card sale, but potentially as the most valuable item of sports memorabilia ever sold. The current standard bearer is Babe Ruth’s 1920 Game Worn Jersey, which sold in 2012 for $4.4 million.

The market for high-grade trading cards has never been more vibrant. Over the past three plus years since the Honus Wagner sale, numerous high-end, sought-after collectibles of Hank Aaron, Roberto Clemente, Ty Cobb, Willie Mays, Pete Rose, Bab Ruth and Nolan Ryan have appreciated in value at a tremendous pace. 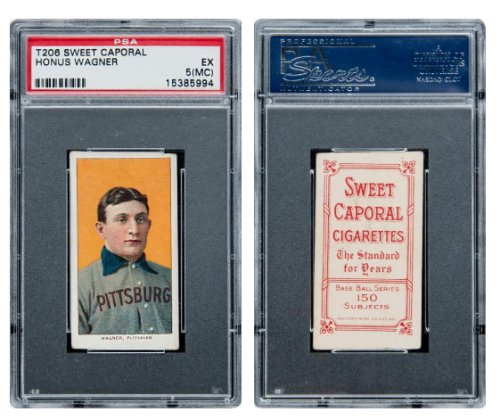 Issued by the American Tobacco Company, from 1909-11 as part of the T206 series, less than 200 Wagner cards were ever issued. Production of the card was halted after Wagner, the Pittsburgh Pirates star shortstop, requested the tobacco company to stop including his image in the cigarette packs. As a result, there have been less than 50 authentic Wagner cards submitted for authentication and/or grading by the major card grading companies. The card’s significance is enhanced as, at the time of it being issued, Wagner was the biggest name in professional baseball. Considered the greatest shortstop ever to play, he was one of the first five men immortalized in Cooperstown alongside Babe Ruth, Ty Cobb, Walter Johnson and Christy Mathewson.