A Historic 1959-60 Wilt Chamberlain Philadelphia Warriors Rookie Uniform Photomatched by SCP Auctions and MeiGray “The finest basketball uniform in the world” was recently brokered privately for a world record price.

SCP Auction is pleased to announce that we recently brokered a record setting private sale of one of the premier basketball artifacts extant, Wilt’s 1959-60 Philadelphia Warriors home uniform worn during his historic rookie season. The jersey and shorts, preserved in superb original and unaltered condition were authenticated and graded by MEARS (A9) and recently photomatched by MeiGray. 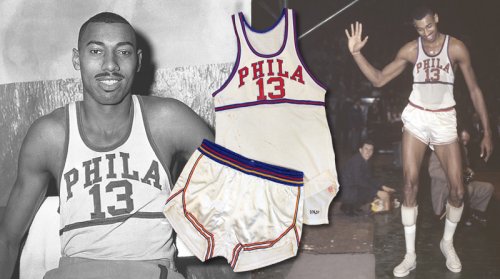 Among the matching photographs is a detailed color image shot by Neil Leifer on January 5 1960 at Madison Square Garden showing the rookie Wilt exiting the court after scoring 52 points in victory over the Minneapolis Lakers (neutral venue). SCP Auctions V.P. Dan Imler stated, “Wilt Chamberlain’s legacy needs no embellishment. His rookie uniform, supported by photo documentation that is unprecedented for its era, ranks not only as the finest basketball uniform in the world, but one of the finest uniforms from any sport, period.” The jersey was recently sold to an advanced private collector for an undisclosed world record price.

In the 1959-60 NBA season, the widely heralded Wilt Chamberlain finally made his debut as an NBA player, starting for the Philadelphia Warriors. The Warriors’ draft pick was highly unusual, as it was a so-called “territorial pick” despite the fact that Chamberlain had spent his college years in Kansas. However, Warriors owner Eddie Gottlieb, one of the NBA’s founding fathers, argued that Chamberlain had grown up in Philadelphia and had become popular there as a high school player. Because there were no NBA teams in Kansas, he argued, the Warriors held his territorial rights and could draft him. The NBA agreed, marking the only time in NBA history that a player was made a territorial selection based on his pre-college roots.

From the beginning, Chamberlain brought a level of domination to the game which had never been seen before. In his rookie season, Chamberlain averaged an incredible 37.6 points and 27.0 rebounds, obliterating the previous regular-season records. He won both the NBA Most Valuable Player and NBA Rookie of the Year awards, a feat only equaled by fellow Hall-of-Famer Wes Unseld in the 1968-69 NBA season. By the time he concluded his 14-year career, Chamberlain would rewrite the NBA record books and cement an enduring legacy as the most dominant force the game had ever seen.