As baseball fans prepare for another memorable October on the field, the 2015 Goldin Auctions October Legends & Americana Auction is offering nearly 1,000 lots of historic baseball memorabilia for sale from October 19th through November 14th, at GoldinAuctions.com. The auction includes; the only known game-used ball from the 1918 World Series, a 1952 Topps Mickey Mantle Rookie Card (PSA 6), a one-of-a-kind 1952 Topps high number 25-card uncut sheet, items from the estate of Hall of Famer Al Simmons and the largest number of trading card lots ever offered.

“Since the market for vintage baseball cards has recently heated up, it’s the perfect time for us to offer the largest collection of vintage baseball cards we have ever included in one auction,” said Ken Goldin, Founder of Goldin Auctions. “In addition, it’s exciting to bring many one-of-a-kind items like the 1918 World Series ball and 1952 Topps uncut sheet to auction for the first time.”

Lot #3 – 1918 Red Sox Game 6 World Series Baseball — Despite breaking the “Curse of the Bambino” in 2004, 1918 will always be synonymous with the Red Sox as it was the year Babe Ruth lead them to their last championship for 86 years. This ball, used in the decisive game six versus the Cubs, was signed immediately after the game by three top Red Sox executives – E.G. Barrow, Harry Frazee and U.J. Hermann and inscribed by Ruth. The ball is dated Sept. 11th, 1918 and includes the game’s final score 4-2 and includes LOA’s from MEARS and JSA.

Lot #4 – 1952 Topps Mickey Mantle Rookie Card Graded PSA Ex-MT 6 –-It is rare when a Mantle Rookie of this quality is offered for sale.

Lot #5 – 1952 Topps High Number Uncut Partial Sheet of 25 Cards Including Mantle – Although most of the uncirculated 1952 Topps cards were dumped into the Atlantic Ocean, this partial uncut sheet survived. As far as we know it is a true one-of-a-kind and one has never been offered at auction. The 25-card sheet, which was cut from the original 100-card sheet includes Mantle, Jackie Robinson, Bill Dickey, Bobby Thomson, Hoyt Wilhelm, Dick Groat and others.

Lot #912 – 1933 Goudey #106 Napoleon Lajoie PSA NM-MT 8 – One of just seven copies assessed at this quality. It is truly a rarity when one of these “short prints” become available for sale. Goudey initially forgot to print the card, and after realizing their mistake, they printed it with their 1934 card run and mailed them individually with a letter of apology to customers.

To register for the auction and receive a free catalog, visit www.GoldinAuctions.com. 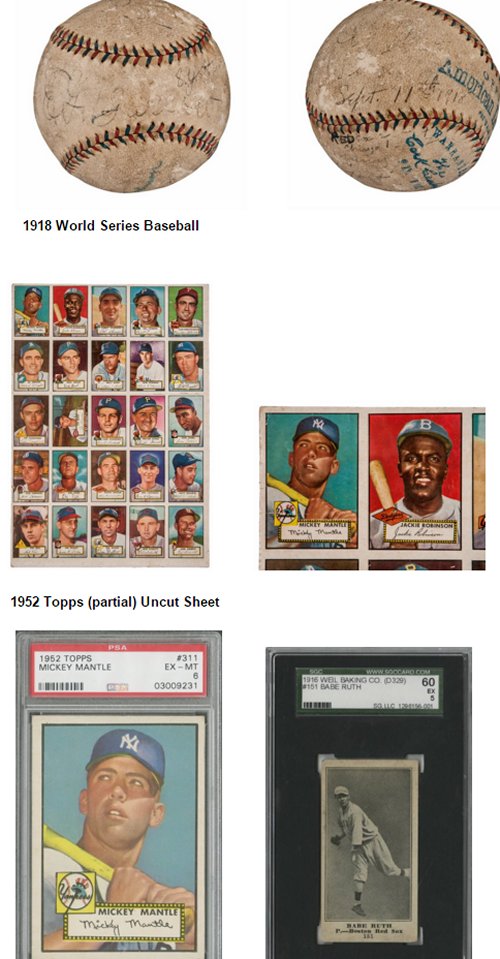