The baseball that Chicago Cubs pitcher Orval Overall tossed for the final out to clinch the team’s 1908 World Series victory over the Detroit Tigers is estimated to sell for at least $100,000 in a sports collectibles public auction now underway by Dallas, Texas-based Heritage Auctions (www.HA.com). The opening bid is $25,000, and bidding will conclude online on Saturday November 19, 2016.

The ball was obtained immediately after the game at Detroit’s Bennett Park by Tigers manager Hughie Jennings who later wrote on it: “World Series, Tigers & Cubs, Oct. 14, 1908, From Charlie Schmidt” (the Detroit catcher who was at bat and made the final out to end the series, four games to one).

“This may be the most important piece of historic sports memorabilia for Chicago Cubs fans,” said Chris Ivy, Director of Heritage Sports Collectibles.

“After Schmidt hit a weak dribbler, Cubs catcher Johnny Kling tossed it to first baseman and team manager Frank Chance for the final out and the Cubs’ World Series victory. Detroit manager Jennings, one of major league baseball’s earliest souvenir hounds, then obtained the ball directly from Chance,” explained Ivy. 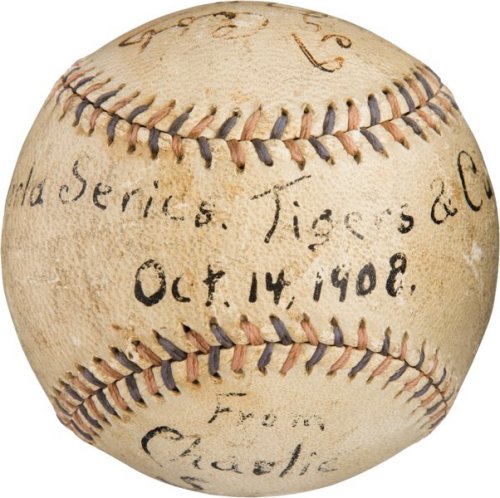 Jennings gave many of his baseball souvenirs to his girlfriend, Nellis Pearl. This particular ball was among Pearl’s estate items that were privately sold by her heirs a quarter century ago. The consignor, who wants to remain anonymous, says the historic ball has been kept by his family since 1990.

“This is the first time this ball has been offered in a public auction. With the Cubs’ long World Series victory drought under its most serious threat in more than seven decades, the ball’s owner decided to capitalize on the excitement of the team’s remarkable run and give another fan a chance to own it,” said Ivy.

“As the ball used in 1908 for the final out of the Cub’s last World Series victory, we risk no hyperbole in declaring it one of the most significant artifacts of baseball history,” he stated.