Mike Eruzione, the leader of the scrappy band of amateur American hockey players that upset the seemingly invincible Soviet Union team at the 1980 Lake Placid Winter Olympics, is putting his keepsakes from the fabled “Miracle on Ice” on the auction block, the anchor collection of Heritage Auctions “Platinum Night” event, now open for bidding atHA.com/Sports. The auction will conclude with live bidding on Saturday, Feb. 23 at the Fletcher-Sinclair Mansion (Ukrainian Institute of America) at 2 East. 79th Street (at 5th Ave). 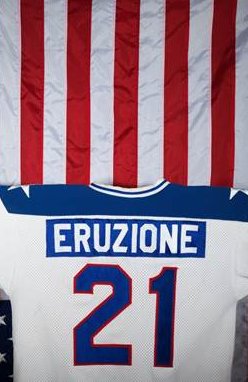 “Widely considered the greatest moment in American sports history, the ‘Miracle on Ice’ victory over a Russian team that had dominated international competition for decades came during a particularly tense period of the Cold War,” said Chris Ivy, Director of Sports Auctions at Heritage, “just months before President Jimmy Carter announced a boycott of the 1980 Summer Games in Moscow. The positioning of the victory in the greater historical context only served to amplify the patriotic response to the ‘Miracle.’”

World record prices are anticipated as Eruzione’s jersey, stick, gloves and pants worn in the February 22, 1980 upset are sold without reserve.  Also on the auction block are Eruzione’s jersey from the subsequent Gold Medal game victory over Finland and the warm-up suit he wore during the memorable medal presentation ceremony when he famously called his entire team up to the podium to share the moment.

The theme of improbable, glorious victory is continued with perhaps the most famous baseball relic of the twenty-first century, the Bloody Sock worn by pitcher Curt Schilling in Game two of the 2004 World Series as he led the Boston Red Sox to the franchise’s first championship in 86 years, finally exorcising “The Curse of the Bambino.”

A key relic from the beginning of the “Curse” shares space within the Platinum Night auction, two checks made payable to former Red Sox owner Harry Frazee by the New York Yankees franchise for the purchase of a young slugger named Babe Ruth, a transaction that was believed by many to doom the Boston club to decades of failure.

The Ruth checks represent one of several lots that shaped the future of New York City baseball, joined by the 1949 signing bonus check made payable to a 17-year old Mickey Mantle upon the finalization of his New York Yankees contract.  Also up for bidding is the silver Tiffany baseball presented to Mayor Robert Wagner in gratitude for his efforts in securing new stadium funding necessary to bring a new National League franchise, the Mets, to New York City.

Other noteworthy Big Apple offerings include a jersey and cap worn by Hall of Fame first baseman Lou Gehrig, the Louisville Slugger used by Mickey Mantle in his final career at-bat, and the jersey Yankees outfielder Chris Chambliss was wearing when he clubbed his dramatic walk-off home run to win the 1976 American League pennant.

The daughter and grandson of Hall of Fame pitcher Walter Johnson, who is second only to Cy Young in career victories with 417, supply the auction with a selection of artifacts from the career of the iconic “Big Train,” including his retirement paperwork and his personal Hall of Fame plaque presented to him as a member of the inaugural induction class of 1939.  Also offered a 1927 handwritten letter from Cy Young one to Johnson from President Franklin D. Roosevelt.