Heritage Auctions November Space Exploration Auction #6179 took place nearly a month ago and the results were outstanding. A little over 900 bidders placed 3846 bids resulting in sales totaling $852,331 with a sell through rate of 98% both by lot and dollar. We sincerely appreciate all the consignors and bidders who participated ion both of our 2017 sales.

Let’s take a quick look at a few of the highlights. An Apollo Guidance Computer DSKY unit signed by Apollo 17 moonwalker Harrison Schmitt found an excellent new home with a winning bid of $47,500. A gorgeous Apollo 8 Flown Robbins Medallion directly from James Lovell’s collection sold for a record auction price of $30,000. A Microform Bible Flown on Apollo 13 with strong provenance reached $27,500. A beautiful and rare set of Ten Flown Fliteline medals in Lucite (1 of 24 made) from Richard Gordon’s collection reached $25,000, more than doubling the estimate and setting another auction record. 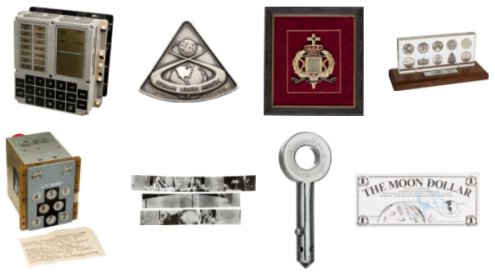 The Non-Floor Session certainly had its share of highlights, also. A NASA CSM Launch Vehicle Engines Event Component was the object of fierce bidding and, when the dust had settled, sold for $10,000. Two interesting Soviet pieces weren’t far behind: a Collection of Eleven Surface Photos from Luna 20 and Luna 21 sold for $4,500 and a Launch Key from Vostok 6 sold for $2,375. A possibly unique Neil Armstrong Signed “Moon Dollar” fetched $2,500. Don’t forget that each of these lots started at an opening bid of $1.00!