Love of the Game’s winter auction closes on January 30. Crisafulli added that the Criger poster will share the spotlight with an impressive lineup of featured items including a beautiful 1929 Lou Gehrig game-used bat, a nearly pristine full ticket from Lou Gehrig’s 1941 Memorial at Yankee Stadium, a rare Venezuelan Nolan Ryan rookie card, a 1952 Roy Campanella All-Star game bat, a beautiful selection of rare N173 Old Judge cabinet cards, and much, much more.

The 1903 World Series came at an exciting time in the development of our National Pastime. The Series was the first ever, pitting the Pittsburgh Pirates of the National League against the Boston Americans of the newly-formed American League. But while enthusiasm and anticipation reigned among sports fans, gamblers lurked in the shadows, hoping to influence the outcome of the sport’s first Championship. 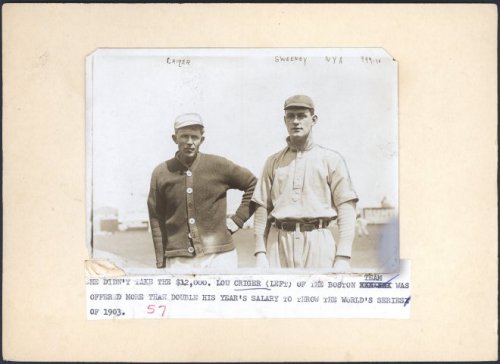 The Red Sox catcher was approached by gamblers and offered the then-astronomical sum of $12,000 to call “soft pitches,” in hopes of giving the Pirates a distinctive edge, and handing them the Championship. Criger refused, and the Boston team went on to win the Series for the upstart American League, giving birth to one of the nation’s most celebrated sporting events.

Twenty-seven years later, the Boston Post newspaper held a much-celebrated Old Timers’ Game at Braves Field in Boston, to celebrate that 1903 team. Nearly 60 former players reconvened at the field in front of 20,000 spectators, reliving old times and sharing memories. Sadly, however, Criger was suffering from a variety of health issues and could not attend the game. In his honor, the players created a Certificate of Appreciation, with 49 attendees signing the large, hand-lettered poster. The poster, which has remained in Criger’s family for 85 years, is now hitting the auction block.

“It’s the most amazing autographed piece I’ve ever handled,” said Love of the Game Auction Director Al Crisafulli. “It is in fantastic condition, and the signatures on it read like a “who’s who” of deadball era baseball and Boston sports. There are 49 autographs – all large and bold – including rare names like ‘Nuf Ced’ McGreevy and Jimmy Collins, and huge names like Ty Cobb and Honus Wagner. It is truly incredible.”

The poster, along with some autographed baseballs and a bat from the game, were given to Boston Red Sox radio announcer Fred Hoey, who arranged for their transport to Tuscon, Arizona, where Criger resided. When he passed in 1934, the poster remained with his family, where it stayed until last fall.

“When I was shown the piece, my knees almost buckled,” continued Crisafulli. “The impressive array of names, along with the quality of the signatures, makes it a fantastic piece. However, it’s the history of it, of Criger’s integrity and the impact it had on the game, that makes it truly special.”

In today’s sports world, with its seemingly endless stream of stories about athletes’ transgressions, a “feel good” story rarely makes headlines. Yet Criger’s refusal to accept the bribe in 1903 may have paved the way for more than a century of pro ballplayers to find success.

“Can you imagine what might have happened if Criger had thrown the World Series and been discovered?” asked Crisafulli. “Baseball was still relatively new, and the American League was in its infancy. Surely, the World Series would never have taken a foothold. It’s entirely possible that with his single, selfless act, Lou Criger saved baseball.” 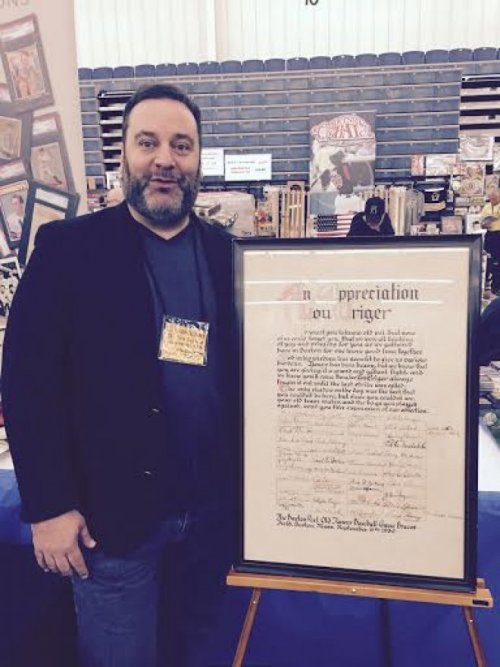 According to Crisafulli, early word of the consignment has been met with strong enthusiasm. “Beyond its significant value, this is the kind of item that really gives you an appreciation of the game,” he said. “When you look at it, it’s like looking at the origins of baseball.