Love of the Game Auctions Spring, 2015 auction is now live, and open for bidding! We invite you to visit our website and take a look at the fantastic selection of cards and memorabilia that we are featuring in this sale. Bid, view and register for the auction at loveofthegameauctions.com. The auction ends March 28th.  Highlights Include:

See Love of the Game on ESPN!

Recently LOTG’s Al Crisafulli was interviewed by acclaimed filmmaker Errol Morris for a series of documentary shorts he was making for ESPN entitled It’s Not Crazy, It’s Sports. The series premiered last week, and Al can be seen in the episode entitled “Most Valuable Whatever,” which explores some of the weird things that find their way into people’s collections. Click here to watch the 15-minute episode and learn about Ty Cobb’s dentures, Maple Leaf Gardens’ clubhouse toilet, the “Butt Fumble” jersey, and hear Al re-live his nightmare of the 2001 World Series, and Luis Gonzalez’ $10,000 bubble gum. 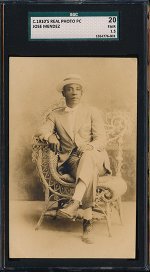 El Diamante Negro (“the Black Diamond”) is a legend in his home country of Cuba, one of the players inducted into the Cuban Baseball Hall of Fame’s inaugural class in 1939. Mendez rose to worldwide fame after throwing 25 consecutive shutout innings in three appearances against the Cincinnati Reds, including a one-hit, complete game shutout.

No less a baseball mind than John McGraw called Mendez “sort of Walter Johnson and Grover Alexander rolled into one.” Mendez was inducted into the Baseball Hall of Fame by the Negro League Committee in 2006.

This stunning postcard depicts Mendez in a dashing suit and boater hat, posing in a wicker chair. That such a dignified-looking, well-dressed man could be a hero in his homeland but was unable to even sleep in most hotels in the United States due to his skin color is a sad blemish on our beloved game.

This postcard, Lot #5 in our current auction, is likely one of the earliest images of the Hall of Famer, who’s 1910 Punch Cigarros card is recognized as his “rookie card.” An example of that card, graded AUTH by SGC, sold at auction for nearly $33,000 in 2011. This example, dated roughly to the same era, is the only one graded and quite possibly the only one of its kind in existence.

The Most Valuable Postwar Football Card 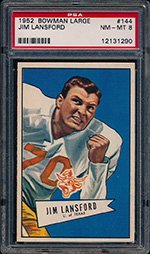 Lot #4 in our current auction is a 1952 Bowman Large Jim Lansford. A “perfect storm” of football cards, this card is a rare, short-printed card from one of the hobby’s most popular sets. It’s Lansford’s rookie card, and is from the more scarce high-number series. It’s also the last card in the set, making it tougher to obtain in high grade.

Just six PSA 8 examples are known to exist, with only two graded higher. No NM-MT examples have sold in public transactions in recent years. In this grade, this card is extremely difficult, and it may be years before collectors see another in a public sale. It’s been valued as high as $25,000.

You can bid on the card here. 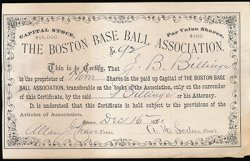 Lot #18 in our current auction is an 1881 Boston Base Ball stock certificate and related receipt. Certificates like this one have been relatively common at auction over the past year or so, as a small group have found their way into the hobby. All were signed by Arthur Soden, the team president and man credited with inventing baseball’s much-heralded (and derided) Reserve Clause.
This particular certificate, however, was issued to J. B. Billings. Along with Soden, Billings became an shareholder of the Boston club, and became its treasurer. Today, Billings is best known as the man who opened the team’s purse and paid $10,000 for Mike “King” Kelly, in one of the most famous transactions of the era (Kelly was often called “$10,000 Kelly,” a nickname that even appears on his 1887 Old Judge cards). Billings owned these three shares until 1893, when he transfered them to Soden. The certificate has been signed on the front by Soden and then-treasurer Allan Chase, and signed on the reverse by Billings. The accompanying receipt has also been signed by Billings, so the certificate includes two signatures from Billings and one from Soden.

Remember our March consignor specials.  For all consignments received by March 31:

Bring your consignments to the White Plains show, or contact us today at info@loveofthegameauctions.com, or (973) 452-9147!

Consignments Wanted For Love of the Game Auctions Fall Auction