What is the most important advertising piece in the entirety of the baseball collectibles hobby? You’ll find no shortage of experts holding that opinion, and those arguing otherwise would find themselves buried beneath a landslide of supporting evidence. By virtually every standard of measurement, the 130-year-old Burke Ale Beer Ad to be offered in our upcoming February 23-24 Platinum Night Auction interior asserts its supremacy, and stands destined to elevate its new owner to the pinnacle of its vibrant collecting subgenre.

We’ll begin our thesis defense by placing the relic within its historical context. Most significantly, this poster represents just the second use of professional athletes for product endorsement, the first having been an 1874 cigar poster featuring Hall of Fame shortstop George Wright. There is no small irony in the fact that the product being hawked here is alcohol, as our national pastime was engaged in a moral struggle over that very thing during the late years of the 19th century, giving rise in 1881 to the American Association, commonly called “The Beer and Whiskey League,” formed in direct response to the banning of beer and Sunday games by the National League. The beer promoted here bears the “E. & J. Burke” label, a brand sheltered beneath the umbrella of the popular “Guinness Brewery” name. 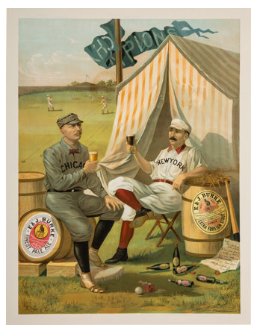 Enjoying “Finest Pale Ale” and “Extra Foreign Stout” respectively are the two foremost figures of the contemporary game, Adrian “Cap” Anson and William “Buck” Ewing, providing unparalleled star power to the idyllic scene. They relax in the shade of a canvas retiring tent and “Champions” pennant as their teammates speckle the landscape beyond.

The extraordinary artwork and production outshines any baseball commemorative produced in the sport’s Dead Ball Era, showcasing the work of Wagner & Co. Lithographers, the nation’s leading practitioner of the field. We find their maker’s mark at the lower right corner. The poster measures 24×18″ in size, not including its backing.

It makes its hobby debut here, consigned to auction along with a letter of provenance from its owner who was gifted the relic by a neighbor in upstate New York decades ago. An absolutely spectacular representation of one of the hobby’s most coveted rarities.