While the name of John Kindler may be unfamiliar to all but the earliest football uniform collectors, the Nov. 6-8, 2014 Heritage Sports Collectibles Signature® Auction is about to make it famous.

“The presentation of The John Kindler Collection represents the most significant single-owner assembly of gridiron garments ever presented at auction,” said Chris Ivy, Director of Sports Collectibles Auctions at Heritage. “This first installment, anchored by dozens of Heisman Trophy winners and Pro Football Hall of Famers, recalls the dawning era of the game used jersey hobby when a few intrepid souls operated within a network of equipment managers, coaches and players themselves to attain that next battle-scarred garment.” 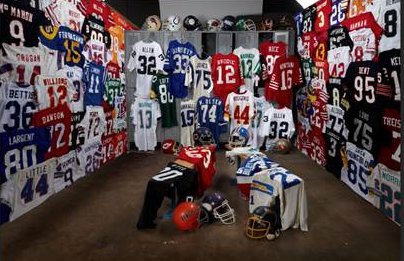 The Kindler Collection is one of several gridiron collections debuting in the Heritage auction, establishing the event as the most football-heavy edition in Heritage Auctions history. Other noteworthy assemblies commemorate the careers of Pro Football Hall of Famer Paul Krause and two-time Super Bowl Champions Ralph Neely and Lionel Aldridge.

The roaring success of The Mike Eruzione Collection in Heritage’s February 2013 Platinum Night auction brought another “Miracle” man into the Heritage fold for this event, with 1980 US Olympic Hockey Team forward John Harrington consigning both jerseys he wore during the historic Lake Placid tournament. The auction will likewise feature the most voluminous assortment of Championship jewelry in Heritage Auctions history, with more than 50 mementos of achievement at the highest levels of athletic competition.

Trading card collectors will find Heritage’s most sizeable offering to date, with more than 1,400 cards from the fabled T206 issue alone, as well as dozens of PSA and SGC-graded sets, high-grade stars and commons, along with some of the hobby’s most elusive rarities. Another grouping from the fabled “Black Swamp Find” of E98 caramel cards will tempt the condition-sensitive hobbyist, as well as a remarkable assembly of unopened wax packs and boxes.

A huge selection of boxing cards is highlighted by more than 400 Police Gazette supplements, a new find of E211 York Caramels and a near-complete library of early “E” sets and T218 Tolstoi backs.  As a bonus,“Shoeless” Joe Jackson’s essential E90-1 appears twice, in Good and VG-EX condition.

Other highlights of this auction include:

Heritage Auctions, headed by Steve Ivy, Jim Halperin and Greg Rohan, is the world’s third largest auction house, with annual sales more than $900 million, and 850,000+ online bidder members. For more information about Heritage Auctions, and to join and gain access to a complete record of prices realized, along with full-color, enlargeable photos of each lot, please visit HA.com.