Andy Leff was one of the true pioneers of hockey collecting at a time when baseball was the only game in town. Now, Nov. 5-7, 2015, the first installment of Leff’s fabled collection – one of the single finest hockey collections ever put together – will be available to collectors via Heritage Auctions.

“My father was a big memorabilia collector, mainly baseball, and he put together a collection of baseball bats that spanned all decades and focused on Hall of Fame players,” Leff, a Philadelphia native explained. “This got me intrigued and I started talking to other collectors and branching out a bit as I found that not many people at the time were putting together a stick collection like this.” 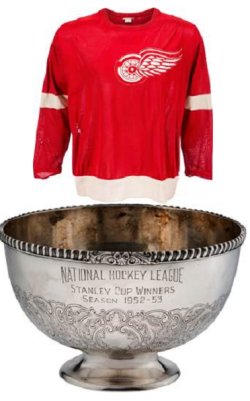 What began as a personal challenge to acquire a game used stick from every Hall of Fame player quickly expanded to include jerseys, pucks, trophies, and any other significant article of hockey memorabilia that crossed his path. Slowly, one piece at a time, Leff assembled one of the premier hockey collections in private hands.

“I started picking up some trophies, awards, rings, then jerseys, then special milestone pucks, equipment and pictures,” said Leff. “It’s nice to have a niche in collecting, as many people do, but I wanted to put together an all-around collection that showcased the entire history of the sport, not just a subset of it. To me, putting together something that encompassed everything about the sport was really unique and allows you to display your items in many different ways to show off the rich history of the game.”

Highlights from Part I the Andy Leff Hockey Collection include, but are not limited to:

1967-69 Gordie Howe Game Worn Detroit Red Wings Jersey: Despite Howe’s status as the all-time leader in professional games played, the supply of quality game used garments such as this is remarkably small. Many Howe gamers that have surfaced date to the closing years of his career as a member of the Houston Aeros or New England/Hartford Whalers. Certainly this Red Wings representation has all other formats soundly beaten. Estimate: $50,000+.

2001 Patrick Roy 500th Victory Game Worn Colorado Avalanche Pads: Only Martin Brodeur has minded an NHL net to more victories than the man honored here, who founded the 500 Win Club during an Avalanche visit to Dallas on Dec. 27, 2001. These are the pads he wore to become the first goalie to reach that lofty summit, doing it in style with 31 saves to record the 59th shutout of his Hall of Fame career. Estimate: $10,000+.

1973 Montreal Canadiens Stanley Cup Championship Ring Presented to Yvan Cournoyer: A Hockey Hall of Fame inductee in 1982, Cournoyer is on the short list of players who scored five or more goals in one NHL game, and is one of only a handful of Hall of Famers who spent their entire career with the same team.

1964-65 Mini Stanley Cup Championship Trophy Presented to Henri Richard: The presentational Stanley Cup Trophy that was given to the Hall of Famer for his contributions on Montreal’s 1964-65 championship squad. Estimate: $5,000+.

1963-64 Art Ross Trophy Plaque Presented to Stan Mikita: The Arthur H. Ross Trophy is award given to the National Hockey League player who leads the league in scoring points at the end of the regular season. Offered here is an original Ross presentational plaque that was awarded to the best center of the 1960s, Stan Mikita. Awarded to the legendary Blackhawks star after the 1963-64 season, when he scored a staggering 89 points. Estimate: $2,000+.

1973-74 Mini Clarence S. Campbell Bowl Trophy Presented to Bernie Parent: An inductee into the Hockey Hall of Fame in 1984, Bernie Parent led his Philadelphia Flyers to consecutive Stanley Cup championship victories in 1973-74 and 1974-75. Presented here is a mini Clarence S. Campbell Bowl trophy that was awarded to Parent for his contributions on the 1973-74 team. Estimate: $1,500+.

The last jersey worn by NHL legend Bobby Orr as a member of the Boston Bruins 1975 team will cross the auction block on Saturday, Nov. 7, 2015, as part of Heritage Auctions’ Sports Collectibles Catalog Auction. It is expected to bring $100,000+.

“This is an unbelievably rare opportunity for a collector to bring home a true, and singular, piece of NHL history,” said Chris Ivy, Director of Sports Auctions at Heritage. “Orr represents Hockey royalty. He was one of the greatest to ever lace up the skates and he left the game without leaving behind much game-used material. A chance like this will not come again for quite a while.” 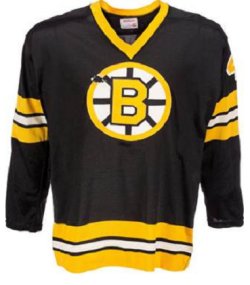 Bobby Orr played just 10 NHL seasons, during eight of which he was the greatest talent ever to wear the black and gold of the Boston Bruins. His brief era of dominance, a spectacular as it was, has left the collectibles hobby in woefully short supply of Orr game worn jerseys.

“This is easily one of most important hockey jerseys to come up for auction,” said Ivy. “It’s the very last one worn by Orr representing the team he twice led to Stanley Cup glory. It’s a fitting bookend to the rookie model that Heritage sold for a record $191,200 in April 2010.”

Heritage Auctions is the largest auction house founded in the United States and the world’s third largest, with annual sales of approximately $900 million, and 900,000+ online bidder members. For more information about Heritage Auctions, and to join and receive access to a complete record of prices realized, with full-color, enlargeable photos of each lot, please visit HA.com.