A Flintlock musket that once belonged to Sitting Bull and Sioux arrows from the Battle of Little Bighorn led Heritage Auctions’ George Armstrong Custer and the Plains Indian Wars Featuring the Glenwood J. Swanson Collection Legends of the West Auction June 9 in Dallas, Texas. The final total from the event was $1,604,392.50, which exceeded pre-auction expectations by more than 30 percent.

Originally made as a model 1863 full-length smooth-bore flintlock trade musket, Sitting Bull’s Identified Hudson’s Bay Flintlock Musket, which includes Sitting Bull’s name scratched in the stock, sparked a spirited bidding war, racing far beyond its pre-auction estimate of $50,000+ before realizing $162,500. Three Sioux Arrows from the Battle of the Little Bighorn enjoyed similarly eager bidding, breezing past their pre-auction estimate of $10,000+ to finish at $93,750. 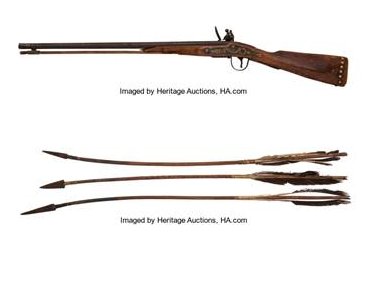 “Our collectors understand the historical significance and importance of the Battle of Little Bighorn and those who fought there,” Heritage Auctions Americana Auctions Director Tom Slater said. “That was particularly reflected in the way people pursued Sitting Bull’s Carbine and the Sioux arrows. Those are extremely significant, important historical artifacts, which is why the bidders went after them so eagerly.”

Among the lots that proved appealing to multiple bidders was William Tecumseh Sherman: His Dress Uniform as General of the Army, which sold for $62,500. The fact that this stunning uniform remains intact after nearly 140 years is extraordinary and inarguably added to its appeal to collectors. Sherman was Custer’s commander at the time of the Battle of Little Bighorn.

An Inscribed .22 Revolver Presented to Custer by the United States Volunteers in 1863 ended at $35,000. The gun is believed to have been presented by his men when he received a field commission as brigadier general from Gen. Alfred Pleasonton and given command of the Michigan Cavalry Brigade, 3rd Division, Army of the Potomac. Given by Custer’s widow, Elizabeth Custer, to “Captain Jack” Crawford, it is believed to be the first presentation revolver Custer ever received.

The Poland Report from Standing Rock, July 24, 1876, Endorsed by Generals Sheridan and Sherman tripled its pre-auction estimate when it drew $30,000. This report is the source of the story of a squad of cavalry who supposedly broke through the Indian lines at Little Bighorn, only to be run down and killed several miles away. Worth noting is the collection of endorsements on the document, a list that includes George D. Ruggles, Assistant Adjutant General for the Department of Dakota at St. Paul, Minnesota; Lt. Gen. Philip Sheridan, Chicago, commanding of the Division of the Missouri; and Gen. William T. Sherman, Commanding General of the Army, at Washington, D.C.

Also bringing in $30,000 was the Fabulous Buckram-Bound set of Goldin’s “On the Little Bighorn with Gen. Custer” with Benteen Notations. The volume includes correspondence between Theodore Goldin and Gen. F.W. Benteen. Goldin distinguished himself by fetching water while under fire after Lt. Donald McIntosh’s Company G retreated following the disastrous attack on the village, ultimately receiving the Medal of Honor. The lot included a five-page TLS, the only known surviving Goldin letter from his exchange with Benteen, dated Jan. 6, 1896. Between the correspondence, collected in The Benteen-Goldin Letters on Custer and his Last Battle (New York, 1964), and the plentiful annotations in these two volumes, there probably is not a better single source of first-hand information about the Battle of the Little Bighorn.