The Four Base Hits “Good Book” Find! It is the stuff that sports collecting dreams are made of. Early in 2014 a couple from Montgomery County, Pennsylvania, trekked to a far-flung thrift store and purchased a group of used books dating back several decades. After returning home and leafing through each volume, a curious discovery was unveiled after generations of concealment. It was uncovered in a late 1800s edition of The Holy Bible and used by the original owner as a bookmark. The sepia trading card featured a portrait of a baseball player surnamed Clarkson along with the advertising slogan, “Smoke Four Base Hits, Four for 10 Cents”. This interesting antique accompaniment was subsequently set aside over several months before the Keystone residents began to investigate its origins in greater depth.

Fast forward to March 2015. Huggins & Scott Auctions was approached by our future consignors at the Philadelphia Sportscard & Memorabilia Show in King of Prussia, Pennsylvania. After exhaustive research, the Christian couple submitted their “Good Book” artifact to third-party authenticator SGC for evaluation. Upon review, an astonishing early diamond treasure was confirmed and entrusted to our company for public sale. Graded 20 Fair 1.5 by SGC. The proudly offered 1887 Four Base Hits John Clarkson is the sole copy of the Hall of Fame pitcher validated by the grading service. Additionally, the haunting image of the Chicago White Stockings star who passed away in 1909 is the only complete version of the card known, as the only confirmed PSA specimen is judged “Authentic” by the service due to trimming. 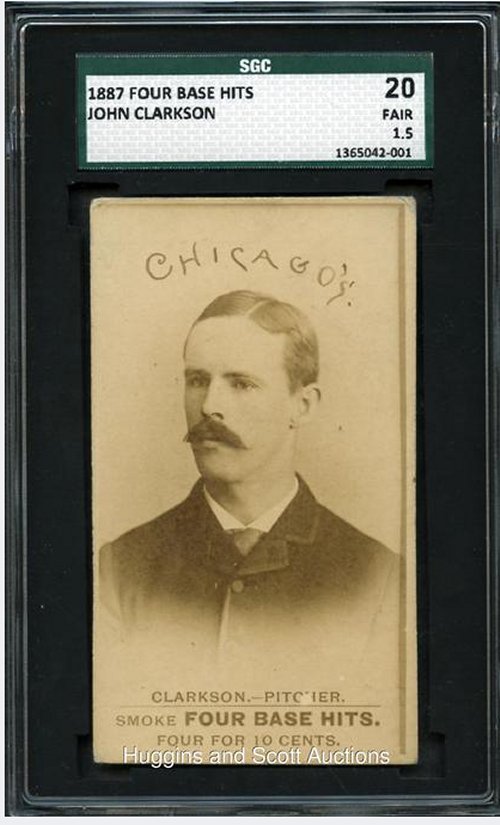 The 1887 Four Base Hits is as scarce as it is cherished by nineteenth-century hobbyists. A total of 17 subjects from the issue have been evaluated by both PSA and SGC with only eight Hall of Fame exemplars confirmed. The fifteen card set (which may not be complete) measures 2-1/4 x 3-7/8″ and is noted for its eye-catching presentation. Adding to the mystique of the 128 year-old issue is that the original manufacturer has yet to be determined. While the near impossible and uncatalogued designation remains shrouded in mystery, it has not escaped the purview of media outlets. A March 2009 article from Forbes ranked the 1887 Four Base Hits Clarkson as ninth on its list of the “world’s most expensive baseball cards.”

This particular specimen of the 328-game winner and 1963 Cooperstown inductee is breathtaking, presenting much higher than the overall technical assessment. The dapper mustachioed hurler is portrayed in his suit-and-tie against a perfectly contrasted sepia backdrop. The sturdy cardboard foundation exhibits superficial corner and edge wear with pinpoint centering and a blank reverse. Faint reverse finger print impressions and an inch-long horizontal edge crease which does not protrude the surface are evident only upon close scrutiny. While the lower obverse concedes two microscopic specks of paper loss (the larger between the “ch” in pitcher) along with a barely perceptible fissure located on the bottom edge, the overall integrity of the surface is not compromised in the least.

An exceptional “once in a generation” hobby discovery with a biblical provenance that is truly miraculous!