Huggins and Scott’s final Masterpiece Auction of 2015 will open for bidding on Monday November 2nd and close on Thursday night November 12th with the 30-minute rule beginning at 11:00pm ET. This is our largest auction of the year with over 2,100 lots.

A terrific assortment is offered with tremendous investment-quality pieces from all sports and the historical and political worlds. It features another amazing array

of items that caters to every level of collector and investor. Whether you only want to spend a few hundred dollars or several thousand dollars, our selection of quality items has a little something for just about everyone. Several unique lots headline this auction. We open the auction with the first installment of hobby pioneer, Lew Lipset’s collection of baseball and golf memorabilia. There are a number of rare and unusual pieces in this section.

Vintage baseball card collectors will enjoy an abundance of pre-and-post war rarities including professionally graded and raw examples of cards from a variety of designations, including Honus Wagner, Ty Cobb, Babe Ruth, Lou Gehrig, Christy Mathewson, Cy Young and more; a number of graded and ungraded tobacco and candy cards offered as singles and in lots, and much more. Highlights include: the highest graded N172 Old Judge Pud Galvin (SGC 86), a pair of scarce N172 John Ward cards, a seldom-seen 1901 Police Gazette Supplement of Christy Mathewson from his rookie year, a stunning collection of (8) different T206’s as PSA NM 7s, an R316 Kashin’s Babe Ruth (PSA 6), a gorgeous 1933 Sport Kings PSA graded run with a Ty Cobb (PSA 5); and many more.

The post-war collection is substantial as well with a large number of singles, lots, complete and near sets from 1948 to present. Highlights include: a 1951 Bowman Mickey Mantle RC PSA 6, a 1954 Topps Hank Aaron (SGC 86), an unusually large number of high-grade singles and lots from the 1950s and 1960s; over 100 different lots of complete baseball sets from 1952-present day; a rare 1955 Felin’s Franks Bobby Morgan panel; a nice selection of unopened material
including a 1957 Topps pack (GAI 6), a 1960 Leaf Series 2 Wax Box (GAI 8.5), a 1975 Topps Mini wax box and an incredible 1978 Topps Factory sealed Rack Case! As always, we also present a plethora of wonderful “shoebox” collections (always a crowd favorite). 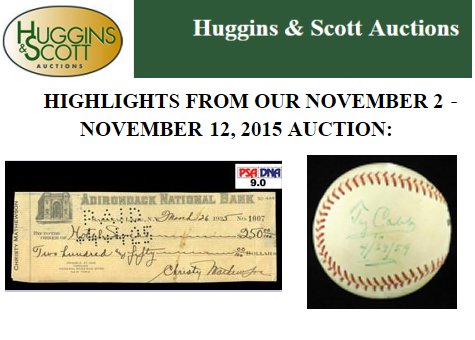 This auction has a large number of baseball autographed items highlighted by the earliest Mickey Mantle autograph we’ve encountered (1949 signed “Mick Mantle”); a number of multi-and-team signed baseballs with Ruth and Gehrig; an attractive 1959 multi-signed ball with Ty Cobb (displaying as a single-signed); a beautiful Jimmie Foxx single-signed and dated ball; a rare Ross Youngs signed photo; an incredible Christy Mathewson signed check (PSA/DNA MINT 9); a tough Miller Huggins signed 1925 stock certificate; a number of Babe Ruth signatures on a variety of media; the first installment of the “We Are The Champions” section featuring team-signed baseballs from a number of World Series Champions from 1980-2013 (the earlier years, going back to 1921, will follow in subsequent auctions); and loads more.

Staying in the memorabilia category, we are pleased to offer a number of championship rings including Dick Green’s 1974 A’s World Series ring (Series MVP), Wayne Krenchicki’s 1979 Orioles AL Champions ring and his 1975 Pan Am Games silver medal; a number of rare and attractive Type 1 original photographs and negatives with subject including Ruth, Gehrig, Huggins, W. Johnson, B. Weaver and more; a number of World Series and All Star Game press pins from the 1950s and

1960s; and a variety of vintage publications and tickets from the turn-of-the-century to modern day including a tough 1916 World Series Game 5 clincher and the highest graded full ticket from Game 7 of the 1957 World Series (PSA 8); and lots more.

Our game-used section in this auction includes some spectacular pieces. The highlight is a pair of 1992-93 Nike Air Jordan’s, worn by Michael on the final home game of that season against the Detroit Pistons (April 22, 1993); an impressive array of game used jerseys from the Orioles, Senators and Phillies from the 1950s to present day; game used bats from Willie Mays, Pete Rose and a tremendous Bryce Harper bat from his rookie season with an exact photo match of him holding the bat; a scarce 1950s Pittsburgh Steelers game used jersey; and a nice grouping of early game used and signed hockey sticks; plus a number of other game-used bats, jerseys, jackets, hats, shoes, equipment and plenty more.

If you don’t collect baseball items, we have a terrific selection of some high-end pieces from the other sports including a wonderful selection of football, basketball and hockey lots, sets, autographs and memorabilia. Highlights include: an impressive run of football sets with a number of high grade stars from 1948 1976; Jerry Rice’s 1996 Mackey Award trophy; several early programs and tickets from Super Bowls, College Bowl games and more; a wonderful 1937-38 Washington Redskins Team-Signed Panoramic photo; a 1967 Green Bay Packers Team-Signed football; a rare 1998-99 UD Jordan Auto/Patch card #11/23; a 2011-12 Miami Heat NBA Championship ring and original box; tough-to-find team signed basketballs from the 1984 US Olympic team and a 1995-96 Chicago Bulls ball from their 72-10 season; a neat 1936 James J. Braddock signed photograph, personalized to Bill Dickey; and many more lots.

If Non-Sports cards, comics, Americana or Political collecting is your cup of tea, we are offering a nice selection in those

categories as well, including a pair of tough 1938 Horrors of War wrappers; rare signatures from John Quincy Adams, Rutherford Hayes, Patrick Henry, Mark Twain, Fiedel Castro (on a baseball), Jimmy Hoffa, Dalai Lama and one of the most exquisite John F. and Jacqueline Kennedy signed photograph we’ve ever seen. There are some rare graded coins, a tough 1977 Star Wars #1 Comic book (CGC 4.5), and a 1974 Incredible Hulk/first appearance of Wolverine comic book (CGC 5.0); and loads more.

Also, remember to check out our “WEB Gems” (post printed catalog) section of auction lots that are not found in the printed catalog, but there are hundreds of great lots to bid on in that category.