While his phenomenal batting prowess is now a well-documented chapter of baseball history, Mickey Mantle was not above acknowledging his own mistakes, as two items in the current Grey Flannel auction so aptly attest. Grey Flannel Auctions’ absentee, phone and Internet auction, which will close for bidding on Dec. 8, contains the speech Mantle hand wrote and delivered over national television shortly before his death in August of 1995. Mantle was gravely ill and being treated at Baylor Hospital in Dallas. In his last public message, which aired from coast to coast, Mantle read from a personally handwritten document, thanking his fans for their cards and flowers, and urging youngsters to avoid drugs and alcohol. View the fully illustrated catalog and sign up to bid on any of the 1,095 professional sports memorabilia items in Grey Flannel’s Holiday Auction now through Dec. 8, 2010, at www.greyflannelauctions.com.

In the speech, Mantle also made reference to Lou Gehrig’s courageous last speech to the Yankees nation, stating: “I said one time I didn’t know how Lou Gehrig could [be] here at home plate knowing he was going to die and say he was the luckiest man on the face of the earth. Now I think I know.” The poignant, handwritten speech Mantle read that day later became part of the Greer Johnson collection. Framed together with other Mantle mementos, the speech is offered as a Premier lot in Grey Flannel’s auction, with an opening bid of $5,000.

In counterpoint, the auction also includes an autographed baseball that revealed Mantle’s ability not to take himself too seriously. Mantle signed the circa-1991 baseball on the sweet spot, and below his signature, the Yankee legend added a colorful expression – “F***ed-up! – referring to the fact that his pen had added a bit more ink to some of the letters in his signature than others. The opening bid on this baseball is $1,000.

View the fully illustrated catalog and sign up to bid on any of the 1,095 professional sports memorabilia items in Grey Flannel’s Holiday Auction now through Dec. 8, 2010, at www.greyflannelauctions.com. For additional information, call 631-288-7800, ext. 223; or email gfcsports@aol.com. 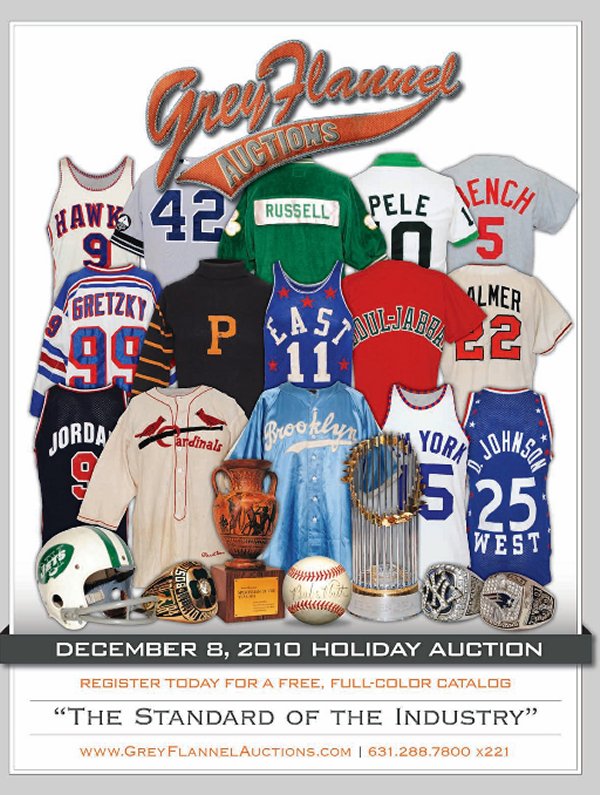