From the first pro team to the tobacco card era, the arrival of bubble gum cards and even modern rarities, Memory Lane’s upcoming Winter Classics Auction will have a little something for everyone. Highlighted by a T206 Eddie Plank, an original Ty Cobb Tobacco tin, a 1902 Sporting Life Cabinets Honus Wagner and dozens of high grade cards from all eras, the auction begins this Saturday, December 3 and closes December 17. 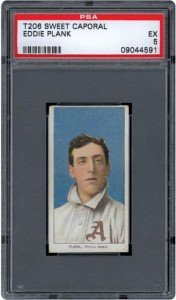 Most of the hobby’s hallmark trading card sets are represented in the catalog, which will arrive in collectors’ mailboxes shortly. Advanced T206 collectors will have the opportunity to bid on one of the most valuable cards in the series, the Eddie Plank. The card is one of the four keys to completing “the monster”. Memory Lane is offering a strong PSA 5 (EX) example, one of the best in existence. A lower grade example sold through another auction house earlier this year for over $90,000. It’s highly likely that this one will stretch well into six figures when the dust settles.

Collectors of tobacco cards and vintage baseball memorabilia have been anxiously awaiting the start of this auction for the chance to bid on one of the best known original Ty Cobb Tobacco tins ever to hit the market. Its existence was revealed earlier this year. The scarce piece is one of fewer than a dozen believed to have survived the century since it was originally released.

Even non-collectors are familiar with the T206 Honus Wagner card, but few realize that the 1902 W600 Sporting Life Cabinets Wagner is far more scarce. Memory Lane offers a PSA 4 (VG-EX) example of the 5-1/4″ x 7-1/2″ portrait in this auction. The photo by Carl Horner is the same one used for Wagner’s famous T206 tobacco card. His name, team and position are displayed while an embossed advertisement for the Sporting Life publication through which this oversized “cabinet” card was created. A PSA 7 1911 Sporting Life Walter Johnson is also offered in the Winter Classics event.

Clearly prominent in hobby history is the 1869 Peck & Snyder Cincinnati Red Stockings Baseball Club team card. Considered by most to be the first of what we now consider baseball cards, it was used to promote the sporting goods company of the same name. Memory Lane is offering the smaller version of this 142-year-old icon, graded Authentic by PSA. 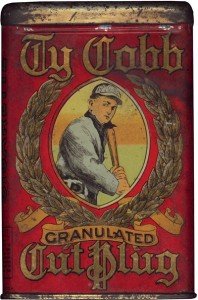 Sadly, few baseball cards were produced for one of the game’s most legendary 20th century stars. Josh Gibson’s feats were legendary, however, and collectors who appreciate his greatness will often fight hard to own one of the cards that carries his likeness. Memory Lane has a 1950-51 Toleteros Gibson card, graded PSA 4. For those who aren’t aware, Toleteros cards were issued in Puerto Rico between 1948 and 1951. It’s believed they were originally part of a table game. Gibson’s prowess in the Winter Leagues was legendary and this card was issued three years after his death, likely as a tribute.

Among the other rare pre-War issues offered in the auction is an 1888 N162 Goodwins Champions Cap Anson graded PSA 6, several 1888 N28 Allen & Ginter including a PSA 6 Mike “King” Kelly, a huge array of 1909 and 1910 E93, E95 and E98 cards including several Hall of Famers, two different 1934 Goudey Lou Gehrig cards, both PSA 7, a 1933 Goudey Babe Ruth (PSA 6) and a rare high-grade example of the #1 card in that set, Benny Bengough. There are two different Joe DiMaggio rookie era cards in the auction as well.

Post-War collectors will have the chance to bid on a pair of 1951 Bowman Mickey Mantle rookies, one graded NM-MT and the other a PSA 7, a variety of 1952 Topps including a PSA 8 Willie Mays, several high numbers from that issue and several mint and gem mint graded cards. There is also a collection of virtually unimprovable 1952 Berk Ross cards including Mantle (PSA 8), Jackie Robinson (PSA 9), Willie Mays and others.

Complete sets will be available from a variety of years and manufacturers including a 1951 Topps Red Mack Master Set of 54 cards, all graded and ranking #3 on the PSA Set Registry with a 9.02 GPA and a 1959 Fleer Ted Williams graded set. 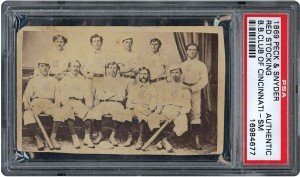 As usual, Memory Lane will have some quality vintage unopened packs and some vintage 1950s and 60s football cards in the mix.

In addition to the Cobb Tobacco tin, memorabilia collectors will find dozens of other lots across all genres including game used bats from the likes of Roberto Clemente, “Sunny” Jim Bottomley and Roger Maris, and a 1973 All-Star Game ring given to famous umpire Nestor Chylak.

Contact Memory Lane via their website or call (714) 730-0600 for a free catalog, to register for the auction or set up a time to discuss possible future consignments.