The photo captured an important image of Gehrig, the beloved former New York Yankees first baseman known as “The Iron Horse,” in 1927, when he won the American League’s Most Valuable Player award. The image was used for his 1933 Goudey cards No. 92 and No. 160. The 7-by-9-inch photo was shot by iconic baseball photographer Charles Conlon for Underwood & Underwood, an early producer and distributor of stereoscopic and other photographic images and eventually a pioneer in the field of news bureau photography. 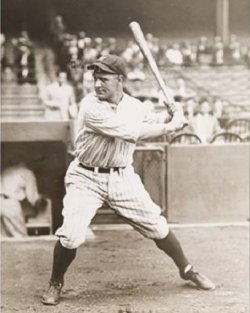 One of the most infamous events in baseball history is depicted in a 1939 Lou Gehrig Farewell Speech Original News Photograph, PSA/DNA Type 1, which sold for $43,200. Forced to retire because of symptoms of amyotrophic lateral sclerosis, which often is referred to now as “Lou Gehrig’s Disease,” he stood before a stadium full of emotional fans and delivered one of the most recognized speeches in the history of the game which opened with the famous line: “Fans, for the past two weeks, you have been reading about the bad break I got. Yet today, I consider myself the luckiest man on the face of this earth.” The speech and the photo are timeless; legendary teammate Babe Ruth can be seen along the image’s right edge, and a flag flies at half-mast in the background.

Bidders clamored for a 1939 Ted Williams Original News Photograph, PSA/DNA Type 1 until it eventually hammered at $19,200. The image is coveted for two reasons: it is from the rookie season of the player many consider the greatest pure hitter of all time, and it is recognized an example of portraiture magnificence, highlighted by the casual, off-center positioning of his Boston “B” cap and Williams’ cool, determined stare through squinting eyes.

A similar frenzy was sparked by a 1955 Roberto Clemente Rookie Year Original News Photograph, PSA/DNA Type 1, ultimately realizing $19,200. Clemente, who spent all 18 of his Major League seasons with the Pittsburgh Pirates, is revered as one of the most talented players of all time, hitting .317 and 240 home runs in his career, while boasting exceptional speed on the basepaths and an extraordinary throwing arm. This image, in which Clemente was taking a practice swing at Forbes Field, appeared in the May 13, 1955 issue of the Chicago Tribune.

Featuring the player on just about every list of the greatest players in baseball history, a 1921 Babe Ruth Original Photograph by Paul Thompson, PSA/DNA Type 1 generated intense competition before eventually bringing $10,200. Thompson supplied his own caption in pencil on the back of the photograph, writing, in part that Ruth is “ambling across the home plate because the ball is in the bleachers.” The scene was not uncommon for the “Sultan of Swat,” whose 2,174 runs scored are still the most ever by a New York Yankee and tied (with Hank Aaron) for the fourth-highest total in baseball history.

Other top items in the auction included, but were not limited to: