One of the finest collections of important ephemera and obscure signed rarities from the legendary and notorious mining boomtown of Tombstone, Arizona comes to life once again in Heritage Auctions’ June 11 Legends of the West Auction. Obscure signed rarities include a license to operate a brothel in the town with notation signed by Virgil Earp:  “Refused payment/VW Earp/City tax collector” (est. $10,000+).

The group was assembled by one determined scholar and collector who spent decades hunting rare items related to Tombstone, which will live forever in Wild West lore thanks to one legendary event: the infamous Oct 26, 1881 “Gunfight at the O.K. Corral.” In one thirty second exchange of gunfire the Earp brothers and “Doc” Holliday squared off against Ike and Billy Clanton, Billy Claiborne, and McLaury brothers Tom and Frank, leaving The McLaurys and Billy Clanton dead. 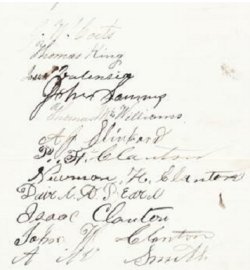 “Interestingly, the story of Tombstone and even the O.K. Corral incident were not widely known until the 1931 publication of Stuart Lake’s popular book Wyatt Earp, Frontier Marshall,” said Tom Slater, Director of Americana Auctions at Heritage Auctions. “Other books and depictions on film over the coming decades would ensure the status of Tombstone and its early citizens as icons of Old West history.”

The June 11 public auction in Dallas features important signed documents, including perhaps the only surviving document signed by the entire Clanton clan (est. $10,000+) and autographs of the participants in that famous shootout, which are among the most prized of any Old West personalities.

Silver mining formed the basis of Tombstone’s economy during its glory days from 1877 through 1890. It has been estimated that the various mines in the surrounding area produced between 40 and 80 billion dollars in silver bullion in today’s dollars, and the populations mushroomed from 200 to some 14,000 in seven years. The collection holds a valuable document archive by E. B. Gage, a Successful Tombstone Mine Operator (est. $3,000+).

Tombstone boasted such refinements as an opera house, three newspapers, two banks, four churches, and even a bowling alley. However, the town is better remembered as having 14 gambling halls, 110 saloons, and the notorious Birdcage Theater, described as the “wildest and wickedest night spot between Basin Street and the Barbary Coast.”

Proof of its “Wild West” reputation, the collection includes a Highly Important Early Document Signed by Dozens of the Leading Citizens of Tombstone, signed two months before the Earps’ arrival in Tombstone, asking the Pima County Board of Supervisors to appoint a constable (est. $5,000+) .

But by the late 1880s the mines had ceased to be profitable, and with their demise Tombstone fell on hard times, its population declining to just 646 by 1910. Recent decades have seen progress in revitalizing what once became nearly a ghost town as a historic sight and tourist attraction, where daily reenactments of the gunfight at the O.K. Corral still captivate visitors.

“Heritage is proud to offer this extensive collection,” Slater enthuses, “as these objects provide remarkable insights into the social and commercial character of this amazing town at the height of its prosperity and notoriety.”

Additional Tombstone-related items offered in the auction include:

Information about Heritage Auctions’ June 11, 2016, Legends of the West Auction may be obtained by emailing Tom Slater at TomS@HA.com.

Heritage Auctions is the largest auction house founded in the United States and the world’s third largest, with annual sales approaching $900 million, and 950,000+ online bidder members. For more information about Heritage Auctions, and to register and receive access to a complete record of our past prices realized, with full-color, enlargeable photos of each lot, please visit HA.com.

Bid in Auctions From NBA Auctions of Game Used Memorabilia