The highest graded Lou Gehrig signed photo is live now on the auction block at Steiner Auctions in the current Spring Fever Auction. The Auction features over 1600 lots of rare sports memorabilia. The original complete set of blue prints to architect the new Yankee Stadium construction; a tennis racket used by Pete Sampras in his first U.S. Open and Grand Slam victory in 1990; Mickey Mantle’s career 10 K gold ring in its original Balfour box; and game-used bats by such baseball greats as Hank Aaron, Stan Musial, Elston Howard, Ken Griffey, Jr., and Mike Trout (first MVP season) are among the highlights of a treasure-trove collection on the auction block in the “Spring Fever Auction” presented by Steiner Sports Memorabilia from now through May 6.  The Auction Closes at 10PM ET Saturday May 6th, so Bid, View and Register for the auction here.

The wide array of memorabilia up for grabs also includes a Barry Bonds game-used Pittsburgh Pirates glove (circa 1990); the most prolific, multi-signed Hall of Fame bat featuring signatures of more than 60 greats; a baseball signed by 27 members of the old Brooklyn Dodgers; and rare autographed and game-used memorabilia from such baseball icons as Babe Ruth, Joe DiMaggio and Lou Gehrig, just to name a few.

A home plate set from historic Fenway Park signed by the Boston Red Sox 2007 World Series Champions; a game-used baseball from Los Angeles Dodgers All-Star pitcher Clayton Kershaw’s first Major League start (vs. San Francisco Giants); and a game-used first base set from the 2004 ALCS signed by David Ortiz (inscriptions: ’04 ALCS MVP’ and Final Out 2004 ALCS) are among the other memorabilia pieces highlighting the hundreds of collectibles on the block. 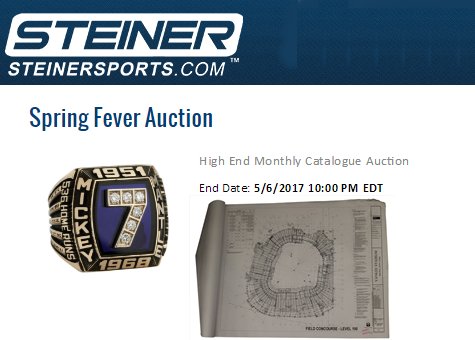 “This is a statement auction for Steiner Sports,” says company founder Brandon Steiner. “Past auctions have been led by rare and remarkable memorabilia such as Jackie Robinson’s game-used World Series Glove and Don Larsen’s Perfect Game Uniform, but never before has there been a lineup like this! We expect spirited bidding.”

The Auction Closes at 10PM ET Saturday May 6th, so Bid, View and Register for the auction here.