SCP Auctions’ 2021 Fall Premier Auction has now kicked off with a 1909-11 T206 Honus Wagner graded PSA Authentic, the ball hit by Barry Bonds for his 500th home run, a 1961 Topps baseball set break of PSA 9s and 10s, a 1933 Goudey set break, Affirmed’s 1978 Triple Crown Trophy, an extremely rare pair of Michael Jordan Air Jordan 1 ‘Player Sample’ sneakers he autographed as a rookie, and much, much more. Bidding on the over 1,200 lots began Wednesday, October 13th and will conclude Saturday, October 30th at www.SCPauctions.com.

The king of the hobby, the 1909-11 T206 Honus Wagner card graded PSA Authentic restored, is the headliner of SCP’s sale this time around. The card is expected to have a multimillion-dollar final hammer price. SCP last sold a Wagner in May 2019, a PSA Good 2 specimen that went for $1.2 million. Since that time, the demand and value for the Holy Grail of sports cards has gone up astronomically. Earlier this year, an SGC Authentic restored Wagner brought over $2.5 million at auction.

One of the other iconic and historic lots in the auction is the ball Barry Bonds blasted into the San Francisco Bay for his 500th home run. In a year where he would also break the single-season record for most homers with 73, Bonds’ biggest bomb of the campaign came on April 17, 2001. To date, Bonds is the only player in MLB history to hit 500 home runs and steal 500 bases. This ball is hitting the hobby for the first time via the man who scooped it out of the depths of the bay, Joseph Figone. Figone had already grabbed the first ball Bonds hit into McCovey Cove a year prior. That ball is also a part of SCP’s 2021 Fall Premier. 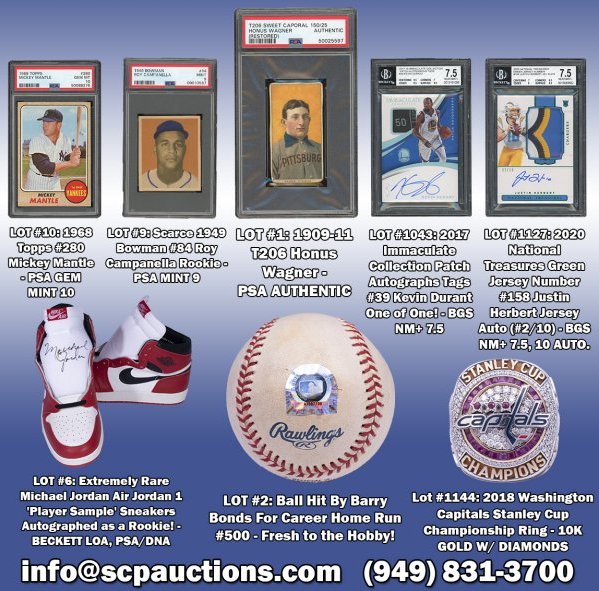 This auction is chock full of cardboard treasures, including over 350 Gem Mint 10s in all. Sixty years after the 1961 Topps baseball set was released, a complete set break of PSA Mint 9s and PSA GEM MINT 10s is featured in 587 separate lots. In all, over 200 PSA Gem Mint 10s are being offered from this set, an astonishing offering that hardly ever comes around. One of the PSA 10s is the #578 Mickey Mantle All Star, one of just four 10s in the PSA registry. The set also features rookie cards from San Francisco Giants ace Juan Marichal and Chicago Cubs outfielder Billy Williams. Both are PSA 10s. The Williams card offered is one of just two Gem Mint 10s in the PSA population report, and the Marichal is one of six Gem Mint 10s in existence. The first card (#1 Dick Groat) and last card (#589 Warren Spahn All Star) in the set are also graded PSA Gem Mint 10, with the Groat being a pop of 2 and the Spahn the only 10 in existence!

SCP also broke up a near set of 1933 Goudeys for our bidders. Goudey is one of the most easily recognizable and popular vintage baseball sets. Among the Goudey lots are a pair of Babe Ruth examples, two Lou Gehrig cards, and the coveted Napoleon Lajoie in a PSA 3.5 grade. The #144 Babe Ruth is a PSA 7 and the #149 Ruth is a PSA 4. A recent example of the #144 in a PSA 7 sold for over $160,000 at auction in June of this year.

Many more important vintage baseball cards will be offered as well, including an iconic 1949 Bowman #84 Roy Campanella Rookie with a PSA Mint 9 grade. A highly sought-after 1968 Topps #280 Mickey Mantle PSA Gem Mint 10 is another headliner.

There are some premium modern cards available in the sale as well. A 2020 National Treasures Green Jersey Number #158 Justin Herbert Jersey Autograph card with a BGS NM+ 7.5 grade and Gem Mint 10 autograph is one of just 10 produced. An incredible 1 of 1 2017 Immaculate Collection Patch Autographs Tags Kevin Durant also carries a BGS NM+ 7.5 grade. For those looking to get their hands on an eye-catching Tim Duncan rookie, look no further than a 1997 E-X2001 Essential Credentials Now #75 Tim Duncan BGS Gem Mint 9.5.

SCP is excited to offer another one of the most sought-after cards in the hobby today, a 1980 Topps Larry Bird/Julius Erving/Magic Johnson Scoring Leaders Rookie graded SGC 10. As of September 2021, the SGC Population Report lists just eight 10s in their library of the 1,520 examples of this card they have graded.

On the memorabilia side of the sale, Affirmed’s spectacular and unique 1978 Triple Crown trophy is offered. Just 13 horses have ever been awarded the Triple Crown since 1875, the first season all three races were run. This example remains in near-mint condition over 40 years after it was presented to Affirmed’s trainer Laz Barrera, who signed it as well.

For basketball memorabilia enthusiasts, SCP is presenting an incredibly rare pair of Air Jordan 1 ‘Player Sample’ sneakers with PSA/DNA and Beckett LOAs signed by Michael Jordan himself during his rookie season. These test basketball shoes were made in very limited quantities and were never available in stores. Combine that with Jordan’s signature on the right sneaker tongue, and these sneakers are nearly impossible to find.

For vintage baseball memorabilia collectors, SCP’s Fall Premier has something for you, too. A scarce Roger Peckinpaugh game-worn 1918 New York Yankees road jersey and one of the finest balls signed by Christy Mathewson at the 1910 World Series are both being presented. The Yankees Captain Peckinpaugh’s jersey is complete with a WWI memorial armband on the left sleeve. This allows it to be dated to the year 1918, when he led the league in double plays turned by a shortstop. The Mathewson signed ball comes with a PSA/DNA LOA.

SCP is honored to present ABA legend John Beasley’s personal collection. Beasley was a three-time ABA All Star and MVP of the 1969 ABA All-Star Game. His game-worn full uniforms from all three ABA All-Star game appearances are being offered, as well as his MVP trophy from the 1969 game. The 1968 ABA All-Star game Beasley appeared in was the first in league history.
Several rare and historic PSA/DNA Type 1 original photographs have been consigned to SCP. These lots include an original shot taken during Martin Luther King Jr.’s “I Have a Dream” speech, a 1984 Chicago Sun Times photo from when the Bulls signed Michael Jordan, a rare “Eyes of Lou Gehrig” photograph, and a shot from Babe Ruth’s first New York Yankees appearance.