A single collector’s historic assemblage of baseball cards, dating from the 1800s to present day, has sold for more than $4.7 million. Along the way numerous records were shattered. And one of the most beautiful Jackie Robinson cards ever produced led the way.

Dallas-based Heritage Auctions this week hosted The partnerone Collection Sports Card Catalog event, offering more than 1,100 of the finest – and, in many instances, the rarest — baseball cards ever produced. More than 1,000 bidders lined up for the chance to own a piece of the impressive lineup, with extended bidding on Heritage’s website lasting into the wee small hours of Friday morning.

“In the past, Heritage has devoted auctions to single sets, racking up record results for 1915 Cracker Jack, 1933 Goudey, 1952 and 1953 Topps, the Don Louchios T206 set and, of course, the David Hall T206 Collection,” Ivy said. “But what makes The partnerone Collection unique is that it included the entire breadth of cards devoted to our national pastime’s long and rich history, and bidders clearly responded to that.” 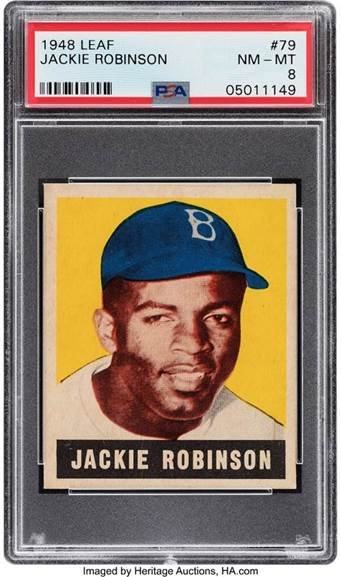 When the sun rose Friday, a 1948 Leaf Jackie Robinson No. 79, graded PSA NM-MT 8, sold for $178,000, a deserving sum for this early bubblegum card featuring the barrier-breaking Hall of Famer. Fittingly, too, that’s the highest price ever paid for this card in this condition. Until this week, the most Heritage had realized for the Robinson ’48 Leaf in NM-MT 8 was $101,575 in November 2016.

That wasn’t the lone Robinson to smash expectations.

The 1947 Bond Bread Jackie Robinson Portrait Card is one of the rarer Robinson offerings out there; and the SGC 92 NM/MT+ 8.5 cardboard found in the partnerone sale was the highest graded example. The card had been valued at $6,000 pre-auction. But by the time extended bidding came to an end, it sold for more than five times that much: $34,800. Proof, as if it were needed with 42 back in theaters following the death of Chadwick Boseman last month, that Robinson still looms large in the American consciousness.

Not surprisingly, a familiar face on one of the most iconic cards ever produced was a big score: Mickey Mantle’s 1952 Topps card, the beloved No. 311. A Mantle graded PSA NM 7 sold for $126,000.

Two Babe Ruths likewise broke records in the partnerone sale – each produced by companies not exactly known for their sports cards.

The 1922 V89 William Paterson, produced by a Canadian candy company, features a unique portrait of Ruth, and it’s a standalone in every way: It’s the lone offering graded PSA EX-MT 6, and there isn’t a better-known example. That explains the sale price of $69,000. Ruth’s 1921 Koester Bread card, graded SGC 80 EX/NM 6, is almost as scarce, and sold for $45,600.

Then there’s Shoeless Joe himself – in his Black Sox uniform, no less. Only a few years before he was banned from the game for conspiring to throw the 1919 World Series, which he denied until his dying day, Jackson appeared on this 1917 E135 Collins-McCarthy No. 82, graded PSA EX-MT+ 6.5. Befitting his legend, and its scarcity – this is the only card graded so highly, with none better – the card sold for $69,000. Its previous high was $27,000.

The Josh Gibson card that sold Friday morning was another of the myriad rarities in the sale – a 1950-51 Toleteros. Not only was it printed in Puerto Rico, but it was done so three years after the legend’s death. The partnerone offering was PSA NM 7, one of the finest-known examples. The record price of $51,600 reflected that.

One of the biggest hits in the partnerone sale was an offering from the same 1948 Leaf set that produced the Robinson smash: the Satchel Paige No. 8, graded PSA NM 7, which sold for $108,000.

Until the partnerone sale, Heritage had seen only one other Paige Leaf in this condition – in 2017, when it sold for $84,000. The Hall of Fame hurler whose career spanned five decades famously said that age is mind over matter – “if you don’t mind, it don’t matter.” Time has been nothing but kind to his legend and his cards.

Go here to see all the results from The Partnerone Collection Sports Card Catalog Auction.