The only known Michael Jordan game-worn University of North Carolina jersey photo-matched to his “Player of the Year” season is now The Most Expensive Michael Jordan Jersey Ever.

Early Saturday morning, No. 23’s Carolina Blue-and-white jersey from the 1982-83 season sold for $1,380,000 during the second night of Heritage Auctions’ May 6-8 Spring Sports Catalog Auction. That’s the highest price ever paid for a Jordan jersey, smashing the previous world record set in October, when Heritage Auctions sold a complete, photo-matched Jordan-worn Chicago Bulls uniform from the 1986-87 season for $480,000.

“Over the last year Heritage has set dozens of world records in the red-hot Michael Jordan collectibles market, and now we’re extremely proud to have shattered the records for a Jordan game-worn jersey,” says Chris Ivy, Director of Sports Auctions. “As the final price tag proves, this jersey has everything any serious collector could possibly want.” 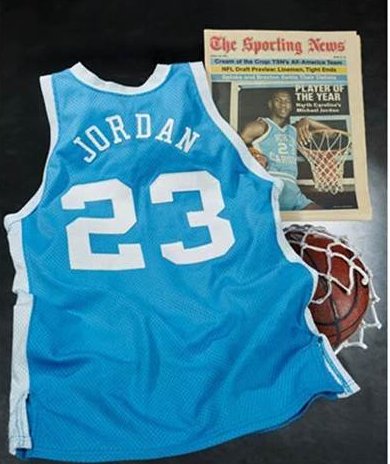 This jersey, in fact, is the very one Jordan sports on the cover of The Sporting News issue that proclaimed him the NCAA Player of the Year. It would be the first of countless accolades to follow that title-winning season, made possible when Jordan hit that jumper with 17 seconds left to secure his Tar Heels the historic win over Georgetown. That was when a lanky freshman named Mike Jordan became Michael Jordan — the very moment, Jordan later told Craig Sager, “that started my career.”

In 2021, this jersey is arguably the most significant Jordan artifact to reach auction – and photo-matched to boot. But in 1983, it was just a sweat-drenched uniform traded among team managers after a Stanford-North Carolina game during the Stanford Invitational tournament at Maples Pavilion.

Says Ivy of the newest record-setting Jordan jersey, “It simply doesn’t get any better than this.”