Memory Lane’s new I Own It Now catalog sale is in progress and is highlighted by a signed and inscribed bat used by Derek Jeter to hit his only home run in All-Star Game competition.  The sale offers more than 1,600 high end lots available for straight sale. The sale is in progress and concludes with offers concluded on October 21st.  Make Your Offers Today!  To Register and/or Buy go to OwnItNow.MemoryLaneInc.com or Call 877.606.LANE (5263) 9-5pm, M-F PST.

The familiar black P72 model is signed and inscribed in silver ink by the newly retired Yankees star. He used it to hit a homer for the victorious American League in July of 2001 at the new Safeco Field in Seattle.

The bat includes an authenticity hologram from Steiner Sports, which handles the team’s game-used and game-worn memorabilia. It’s listed at $75,000 but as with all items in the I Own It Now format, interested buyers can wait until October 13 and make an offer if the bat isn’t sold for the asking price. Such is the case with each item in the sale, which opens at noon Eastern Time, October 9. The sale will end for good on Tuesday, October 21. A 15% buyer’s premium will be added to items sold during the event. 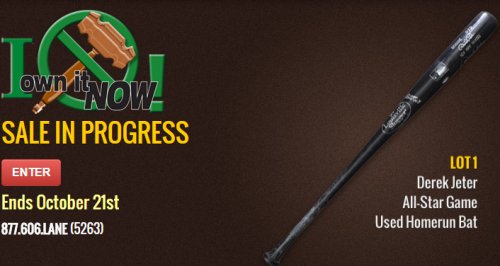 For those who prefer their cards and memorabilia of a much older vintage, Memory Lane will offer hundreds of items from $100 and up including one of the hobby’s most sought after cards, a T206 Eddie Plank, graded PSA 4 (VG-EX). One of the rarest cards in existence, the Plank is listed at $65,000.

You can’t think Ruth without thinking about Lou Gehrig and the sale will offer one of just eight 1933 DeLong Gum Gehrig cards graded at the PSA 8 level. The card is being offered at $42,500.

One of the best cards in the famous Black Swamp Find is up for grabs as well. Located in a stash of virtually untouched caramel cards that had been sitting in storage for more than a century, the 1910 E98 Ty Cobb graded PSA 8 carries a price of $35,000.

Pre-War set collectors will have the rare opportunity to grab one of four completely graded sets of the 1922 E120 issue. With 240 cards in the set including numerous Hall of Famers, it’s among the most popular pre-gum card era sets and is listed at $29,000.

Post-War baseball cards in the I Own It Now catalog include a 1954 Wilson Franks ted Williams in near mint-mint condition that’s priced at $32,500, a 1957 Topps Sandy Koufax graded PSA 9 ($27,500) and one of the best offerings of 1951 Bowman cards ever to hit the market: the #10 set on PSA’s Registry with a GPA of 8.15, the set is being sold without the Mickey Mantle and Willie Mays rookie cards and is priced at $95,000. There are also rookie cards, Hall of Famers and high-grade commons from vintage football, basketball and hockey sets.

To register, visit Memory Lane Inc.’s website or call 1-877-606-5263. The company is now accepting consignments for its Winter Auction, scheduled for later this year.