Forty (40) lots of one-of-a-kind items from John F. Kennedy, Lee Harvey Oswald and Jackie-O, are up for auction through May 7at GoldinAuctions.com. The lots include letters, magazines and a holiday card signed by the President; a handbag and designer shoes that were owned by First Lady, and Lee Harvey Oswald’s clothing and other personal items. For a look at all 40 JFK-related lots, visit GoldinAuctions.com.

Three of the most unique items in this auction are from JFK’s assassin. Lot #1385 offers Oswald’s grey two-piece suit which he wore at his wedding and was also his only dress clothes; (current bid $7,000). Lot # 1384 presents Oswald’s blue wool overcoat that he purchased while still in the Marine Corps during his time at Naval Air Facility Atsugi near Yokohama, Japan. It includes his name embroidered under the left inside pocket (current bid $5,000). The third prominent Oswald personal item is Lot #1381, his 28-piece chess set (current bid $5,000). Other Oswald memorabilia being offered include: his mug shot; pay stub from Jagger-Chiles-Stovall; his childhood piano, and more. 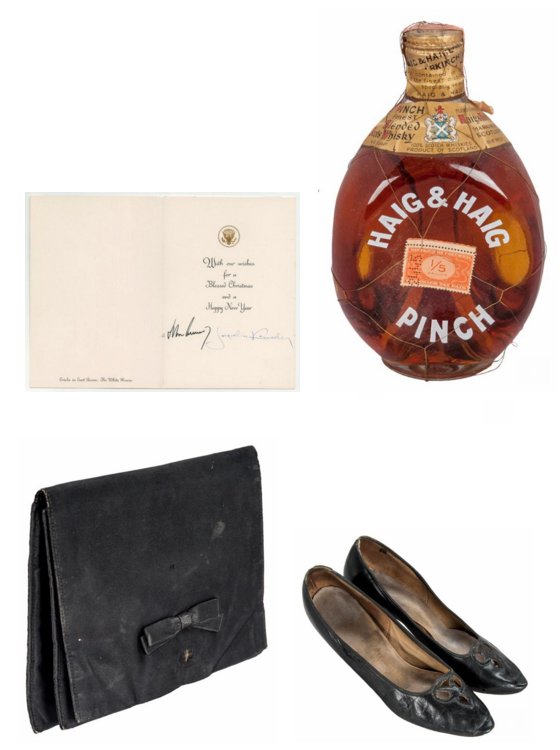 The auction also features several lots of memorabilia signed by President Kennedy including: Lot #1346 – the 1963 White House Christmas card signed by JFK and Mrs. Kennedy, just one of only 15 signed prior to JFK’s death (current bid $7,500). Lot #1348 is a rare 8″x10″ JFK signed color photograph taken by L. Fabian Bachrach in 1961 and regarded as the definitive JFK portrait (current bid $3,500). Lot #1364 is third Kennedy signed item, this one a 1961 LIFE Magazine Special Edition inauguration issue with a personal inscription to Betty Proxmire. Two other unique JFK items include Lot #1361 an unopened bottle of his Haig & Haig Pinch Scotch and; Lot #1362 a personally owned Cuban cigar given to him after the Cuban Missile Crisis.

The First Lady is represented in the auction with two separate lots of designer shoes and a Christian Dior satin clutch – Lot #1374. Dior was one of Jackie’s favorite designers and this iconic 7″x9″ fold-over black satin clutch was a staple in her designer collection. (current bid $4,000). Lot #1376 presents a pair of black leather heels made by Pappagallo (current bid $3,000) while Lot #1373 offers a pair of her Revette Creation high-heeled shoes – a dark, cream color with textured fabric uppers (current bid $3,000).