Today marks the 57th Anniversary of the assassination of Presidents, John F. Kennedy. The assassination of President Kennedy hit the American people harder than the death of any President since the founding of the nation. This was in part due to Kennedy’s youthful persona which resonated with not only the World War II veterans who were his contemporaries, but also with the younger generation who looked to him as a bright beacon, leading to then into the future. For many, this brief, hopeful era came to an end on November 22, 1963.

The Goldin Auctions 2019 Holiday Auction – open for bidding at GoldinAuctions.com through December 7, 2019 – is offering the Perpetual Flame Torch which stood vigil over President Kennedy’s memorial in Arlington from 1966 until 1967 when the current memorial was consecrated. This incredible artifact and accompanying archive traces the development of this unique monument from the drawing board to reality. Measuring approximately 19 inches in height, the torch is constructed of stainless steel and bronze parts adapted from several existing sources: the head is a stock “Tiki” model head from Craftsman Copper Company of Costa Mesa, California while the outer weather shield is the smallest bowl of a Sears stainless steel mixing bowl set. 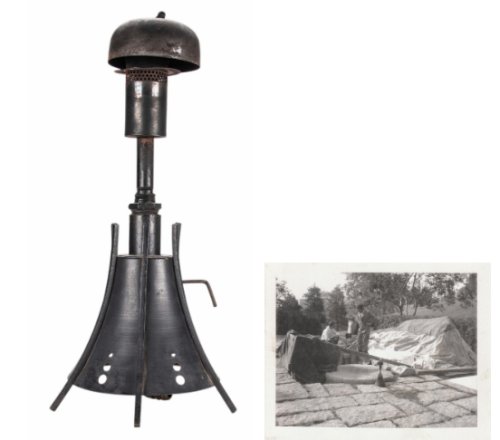 Included is a construction drawing of the torch head and memos from several of the companies that aided in its construction. Additionally, there are several letters regarding the development of the torch, discussing such details as the ideal Btuh rating for the flame and its safety testing by the FBI. A pair of black and white snapshots taken during the construction of the memorial and placement of the torch completes this one of a kind historical artifact. This archive originates from the Utilization Engineer of the Washington Gas Company in whose possession it has resided until being offered here at Goldin Auctions. Goldin Auctions Estimates the Sale Value between $40,000 and $60,000.

About Goldin Auctions: Sports memorabilia impresario Ken Goldin has sold more than $700 million in memorabilia from many of the biggest names in sports, history and pop culture and was the pioneer of using the medium of television to sell sports memorabilia. Over the past few years, Goldin Auctions sold a Honus Wagner T206 card for a public sale record $3.12 million, Babe Ruth’s 1918 contract for a record $1.02 million, the Mike Piazza Post-9/11 home run jersey for $365,000, and the 1979-80 Wayne Gretzky PSA GEM MT 10 rookie card for a record $465,000. Goldin Auctions strives to break new ground and offer collectors the best in collectible treasures up for auction in the marketplace. Goldin Auctions is the official auction partner of the Naismith Memorial Basketball Hall of Fame, the Jackie Robinson Foundation and the Babe Ruth Birthplace and Museum. For more information, visit goldinauctions.com