SCP Auctions is extremely proud to announce that it will be offering the vast original manuscript archive of Jim Bouton’s controversial 1970 best-seller Ball Four in its 2017 Winter Premier online auction, which is underway at www.scpauctions.com. The Ball Four collection includes the complete hand-written notes by Bouton – scribbled on everything from scratch paper, peanut bags, and air sickness bags – to audio tapes and transcripts, various drafts and revisions, and even a letter from the publisher’s lawyer identifying 42 instances of potential libel and Bouton’s final edits that addressed only four of them.

Bouton told ESPN in 2003: “The idea of Ball Four came to me after my first year in the minor leagues. I would spend all day long with a notebook in my pocket. I’d fill it with notes, sometimes the whole book in one day if it was a really good day. But then I’d run out of note paper and I’d write on whatever was available. If I was on an airplane I’d write on an air-sickness bag. If I was in the bullpen I’d write on a popcorn box, a peanut bag….I was constantly writing. I was a writing maniac.” Nearly every tangible piece of Bouton’s creative process is contained in the Ball Four manuscript archive in a remarkable state of preservation and organization.

“There is nothing to equal the Ball Four collection anywhere else in the world,” said SCP Auctions’ Vice President Dan Imler. “These documents and artifacts comprise a literary diary that changed the landscape of sports and journalism forever after. It is a museum-worthy collection that will inform and inspire historians, scholars and devoted fans for generations.” 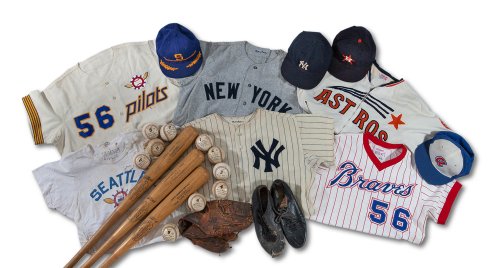 With the New York Public Library’s selection of Ball Four as one of its Books of the Century (the only sports title), Bouton stands shoulder-to-shoulder with such world figures as Anton Chekov, Marcel Proust, Franz Kafka, James Joyce and F. Scott Fitzgerald. “Ball Four,” the editors noted, “was the first ripple of a tidal wave of ‘tell-all’ books that have become commonplace not only in sports, but also in politics, entertainment, and other realms of contemporary life.”
Now 77 years old, Bouton, a former major leaguer who pitched for the New York Yankees, Seattle Pilots, Houston Astros, and finally, the Atlanta Braves at age 39, recorded 62 wins, a 3.57 ERA and 720 strikeouts over the course of his 10-year MLB career, which included a 21-win season for the Bronx Bombers in 1963. But his claim to fame will forever be his authorship of Ball Four, which ignited a firestorm of controversy when it was first published nearly 47 years ago.

A diary of Bouton’s 1969 season with the Pilots and Astros, it’s also a time capsule of life in the 1960’s. When it was first released, Bouton was called everything from a Judas to a Benedict Arnold for having violated the “sanctity of the clubhouse” and airing in public a side of baseball that was previously unseen. Upon its publication, then-MLB Commissioner Bowie Kuhn called the book “detrimental to baseball” and tried to force Bouton to sign a statement saying that the book wasn’t true. The author refused.

In addition to the Ball Four collection heading to the auction block is Bouton’s personal collection of memorabilia and baseball artifacts from his playing career including game-used jerseys, baseballs and bats from significant moments in his career.

Bidding is open to registered bidders only at www.scpauctions.com and closes on Saturday, January 21st. For more information on how to participate, please call 949-831-3700.

About SCP Auctions
SCP Auctions, Inc. has been a leader in brokering and auctions of important sports memorabilia and cards since 1979. The southern California-based firm conducts online auctions throughout the year, highlighted by its Premier Auctions in the spring and fall. SCP Auctions has handled some of the most significant individual items and prominent collections in their field, such as the record-setting sale of the earliest known jersey worn by New York Yankees legend Babe Ruth ($4.4 million), the 1857 “Laws of Baseball” hand-written documents ($3.26 million), the famed T206 Honus Wagner baseball card ($2.8 million), Jesse Owens’ 1936 Berlin Olympics gold medal ($1.44 million), and Babe Ruth’s bat used to hit the first home run in Yankee Stadium ($1.3 million).