The top selling Ruth item was one of only two PSA/DNA-certified copies of autographed 1929 Kashin (R316) photos carrying his signature and the only one given a ‘10’ grade. Rocketing past a $12,500 minimum bid, it sold for $70,563 including the buyer’s premium. A team-signed 1924 Yankees ball featuring Ruth and a young Lou Gehrig went for $63,427 while a Ruth-penned Yankees payroll check that also included the signatures of Jacob Ruppert and Ed Barrow netted $33,586. 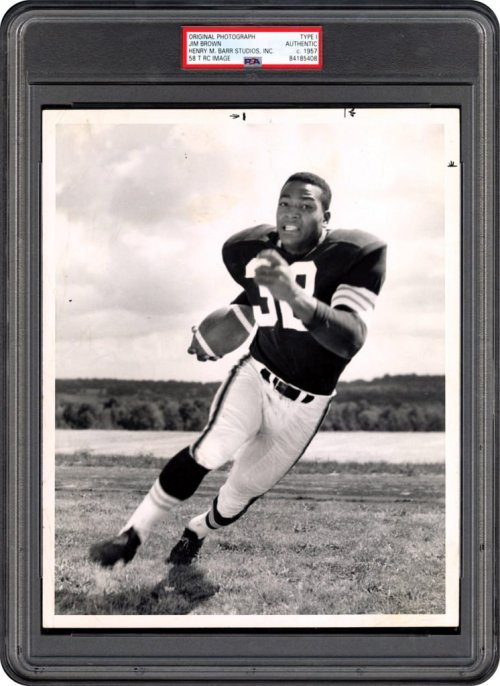 Overall, the top-selling item in the auction was a signed 1934 Goudey Lou Gehrig card. With a Mint 9 signature rating from PSA/DNA, it closed at $77,917 – the highest amount ever paid in a public auction for a signed Gehrig Goudey card.

The market for vintage Type 1 photos continues to climb and Memory Lane’s auction included a record-setting price for an image identical to the one used to create Jim Brown’s 1958 Topps rookie card.

The black-and-white Henry Barr photo, one of only a few known to exist, dates to the Cleveland Browns training camp during the former Syracuse star’s rookie season of 1957. The 8×10 image sold for a whopping $68,125. A Type 1 news photo of Sandy Koufax and the Dodgers celebrating their 1963 World Series championship also attracted a bidding war before realizing a remarkable $25,959.

“Photos that represent a historical time in history are really being sought by top collectors,” explained Memory Lane’s J.P. Cohen. In all, his company’s auction generated over $2.5 million which included multiple records.

There were dozens of high-grade and rare trading cards offered. One of only a small known number of 1948 Leaf Boxing Rocky Graziano cards, a PSA 4 (VG/EX) example offered by Memory Lane, reached $53,479.

Michael Jordan cards continue to generate strong interest and high prices aren’t confined to the 1986-87 Fleer issue. One of only a small number of PSA 10 examples of his 1987 Fleer sticker scored a remarkable $16,685.

The auction included other high-end modern cards as well with a 2005 Topps Chrome LeBron James Gold Refractor PSA 10 selling for $19,646.

Memory Lane is now working on its “First Dance Auction” set for this summer, one that will focus on rookie memorabilia. Consignments are being accepted. For more information, visit the company’s website.