One record that hasn’t fallen is that Brown remains the only player in NFL history to average more than 100 yards per game over an entire career. Now Brown’s 1957 Rookie contract with Cleveland is now on the auction block at www.scpauctions.com with bidding scheduled to close this Saturday, April 25. A featured item in SCP Auctions’ online Spring Premier, it could fetch as much as $35,000.

Picked by the Cleveland Browns in the first round of the 1957 NFL Draft, Syracuse All-American Jim Brown would go on to an a historic, Hall of Fame, nine-year NFL career. By the time Brown retired he was the career leader in rushing touchdowns (106), career rushing yards (12,312) and single-season rushing yards (1863). For four of those nine years the NFL only played a 12-game schedule. Those marks have since been eclipsed, but by those playing 14 to 16 games a season.

“Jim Brown’s 1957 Rookie contract has to be one of the most important pieces of Jim Brown memorabilia known and is certainly among the most significant football related documents in existence,” said SCP Auctions Vice President Dan Imler. 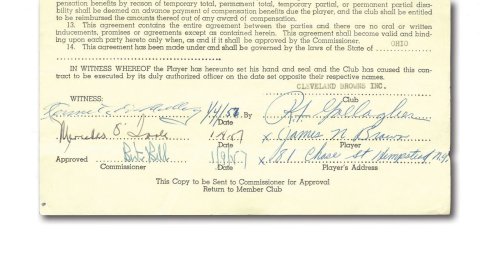 Measuring 8″ x 19-5/8” the one page yellow document is in very nice condition, with the usual horizontal folds. The “NATIONAL FOOTBALL LEAGUE STANDARD PLAYERS CONTRACT,” features all the printed legal details plus typewritten specific notes regard Team (“CLEVELAND BROWNS INC”), City (“CLEVELAND, OHIO”), Year (“1957”), Player’s Name (“JIMMY BROWN”), and Schedule of Payment (“75% of said salary in weekly installments commencing with the first and ending with the last regularly scheduled League game played by the Club during such season and the balance of 25% of said sum at the end of the last regularly scheduled League game.”). The annual salary, “$12,000.00”, is hand written in blue ink.

The historic document has been signed on the bottom left by legendary NFL Commissioner Bert Bell (d.1959). On the right side is a near perfect Blue ink “James N. Brown” signature (9-10/10) along with that of Cleveland Browns scout Richard Gallagher (9-10/10). Two witnesses have also signed on the left. On the back is a handwritten addendum written by Gallagher that reads: “In consideration for signing this contract the Cleveland Browns Inc., agree to pay Jim Brown $3000.00 (three thousand dollars) at his option (as a bonus for signing this contract). Both Jim Brown and Gallagher have signed this article in the same blue ball point pen. Brown responded with a strong rookie season for the Browns, leading the league in rushing yards (942), rushing touchdowns (9) and rushing yards per game (78.5). Brown never missed a game due to injury and would lead the NFL in rushing for his first five years in a row and in eight of his nine seasons overall. After leading the Browns to an 11-3 record and the NFL Title Game in 1965, Brown retired at the age of 29 to enter the motion picture business.

Online bidding is open to registered bidders only and concludes on Saturday, April 25. The auction is being conducted online at www.scpauctions.com. For more information, call 949-831-3700.