University Archives Top Ranked – In a survey of historical book and manuscript auction houses conducted for the week ending January 17th, University Archives ranked among the best, according to Rare Book Hub. At our January 16, 2020 sale, we had one of the highest sell-through rates in the industry, with over 85% of lots sold. In addition, University Archives delivered 3 of the top 25 lots overall (2nd, 5th, and 23rd).  Anyone who has a single item or a collection that may be a fit for a future University Archives auction may call Mr. Reznikoff at 203-454-0111, or email him at john@universityarchives.com. 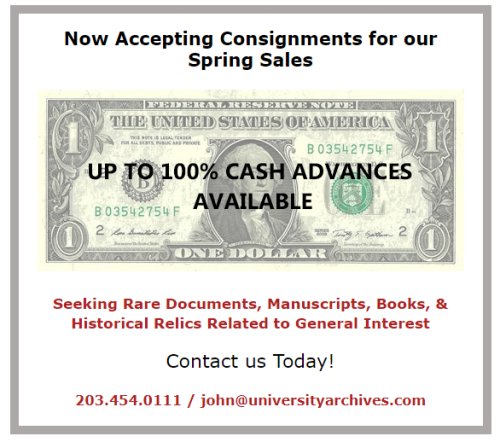 Eager bidders gave a tip of the top hat to Abraham Lincoln in University Archives’ online auction held January 16th. Several historically significant lots pertaining to Honest Abe were offered in the sale, with two of them combining for $250,000. In all, 281 lots came up for bid in an auction that grossed nearly $900,000, including the buyer’s premium.

The sale’s top earner was a copy of the book The Miscellaneous Works of Oliver Goldsmith, by American author Washington Irving, with an ownership signature by Lincoln ($175,000). The book, which was formative to Lincoln’s views on slavery, had been given to him by his brother-in-law, Ninian W. Edwards. Lincoln later presented it to his law partner, with an inscription.

The runner-up lot was also Lincoln related: a carte de visite photograph of the president, signed by him (as “A. Lincoln”) and PSA graded Gem Mint 10 ($75,000). The photo had been found in the personal photo album (included in the lot) of the wife of Colonel Benjamin Rosson, whom Lincoln had personally thanked in his “Lincoln Log” in 1864 for service during the Civil War.

University Archives is always seeking quality consignments or items for outright purchase. The firm’s next online-only auction is slated for Wednesday, Feb. 26, with a 10:30 am EST start time. Up to 100 percent cash advances are available for great items valued from $5,000 to $5 million.