The Goldin Auctions 2020 Spring Auction, open for bidding through May 16 at GoldinAuctions.com, offers perhaps the greatest collection of basketball memorabilia ever assembled including an 87-lot Kobe Bryant Auction; a 195-lot Naismith Memorial Basketball Hall of Fame Auction; and 70 lots of Michael Jordan memorabilia that has gained unprecedented interest from collectors and fans due to the popularity of the ESPN documentary “The Last Dance.”

The auction will benefit three different charities as Goldin Auctions will donate 5% of the winning bid price for all items in the Kobe Bryant Auction to the MambaOnThree Fund and 5% of the winning bid price for each item in the hall of fame auction to the Naismith Memorial Basketball Hall of Fame. Additionally, the company will donate a portion of the buyers’ premium for all other lots – with a minimum donation of $25,000 – to the CAMCare Foundation for COVID-19 related causes at New Jersey’s Cooper Hospital and PPE at CAMCare health centers. 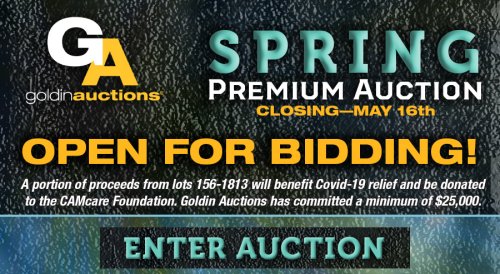 Here are some highlights of the Goldin Auctions 2020 Spring Auction and the current bid as of May 14, at 9:00 am ET. The entire catalog is open for bidding through May 16 at GoldinAuctions.com.

Lot #192 – Circa 1850s-1870s Morse Hockey Stick Possibly the Oldest Known Hockey Stick (MEARS) – This offered hockey stick is an artifact that dates to the mid-to-late 19th century, having been narrowed to the timeframe circa 1850s to 1870s. With the first recorded hockey game being played in Montreal in 1875, this stick dates as much as 25 years prior that game. About 30 years before the first game in Montreal, it was well known that the New England states were playing some form of hockey or “hawkey” (the word that originated from England). (CURRENT BID: $100,000)