In a year when trading cards became considered an asset class, two particular sports legends named Mike who started their careers in the 1980’s – Michael Jordan and “Iron” Mike Tyson – had their rookie trading cards set new records this past weekend in Goldin Auctions “End of Year “Auction.  The first of the two records was set by Heavyweight boxing Champion Mike Tyson’s rookie card, a 1986 Panini Supersport #153 sold for $47,970, shattering the previous high sale of $6,999 for a 683% yield.

The same year of the Tyson rookie card, Michael Jordan’s popular 1986 Fleer rookie card also kept climbing as Goldin Auctions has set the record high sale for this card four times in the past 6 months, setting a new mark of $222,630, besting the $211,560 record set less than 30 days in December.

“Here we go again” said Ken Goldin, Founder of Goldin Auctions in reaction to the new records, “We have begun a new way of doing business here at Goldin Auctions without sellers and buyers having to wait months in between auctions and the supply is being met by the demand.” 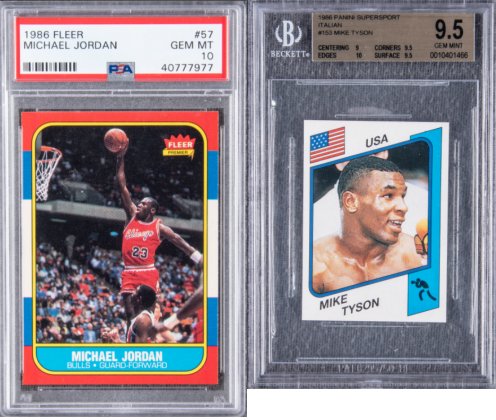 Goldin auctions is actively accepting consignments for its upcoming Winter Auction which we anticipate taking place in early February. To get into the next auction you can consign by emailing an image and description of your items to info@goldinauctions.com.