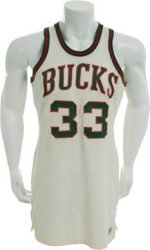 The pieces have been consigned by Dr. Patrick McBride, Dean of Students of the University of Wisconsin-Madison Medical Schools, who also holds the distinction – which stands to this day – of having been named the youngest Equipment Manager in the history of professional sports. McBride has kept the pieces in his closet for the last 40 years.

McBride, who started as a bat boy for the Milwaukee Brewers and then the Bucks, was made Equipment Manager shortly after the ’70-’71 season, when the previous Equipment Manager died suddenly. The equipment from each season was stored when the season ended and, a few years after the historic first championship, while going through the stored equipment, McBride came across the gamers mentioned above and asked the team if he could keep a couple of them. He was granted permission and McBride chose the Alcindor and Robertson jerseys.

“I knew back then that they would be of significant value and that they were from an historic moment,” said McBride, “but more to the point was that I was there for every one of those minutes in that first Bucks championship season. I spent a lot of hours in those arenas and I worked hard at those games. They meant a lot to me.”

The 1969-71 Lew Alcindor jersey is significant on any number of levels, as it marks not only the last time that one of the great players in NBA history, Kareem Abdul-Jabbar, would go by his birth name, but it also the jersey he wore in his first championship, in his first MVP and Scoring Title season. The jersey is expected to bring $100,000+.

There are very few who would openly contend that Oscar Robertson is not the greatest point guard in NBA history and a tried and true champion. Nowhere was this more evident than in the ’70-’71 season when Robertson was acquired by the Bucks to help mold the young Alcindor and, eventually, bring the Bucks their first and only championship. This jersey was on The Big O’s back the whole time and is expected to bring $50,000+ when it crosses the block.

“It was an amazing thing to watch Robertson that season,” McBride said. “He not only sacrificed his own points to help Kareem, he showed him how to win a championship and he gave every ounce of himself to every game. I saw, night after night, as he gave his all and demanded the same of every player on that team.”

While Kareem’s goggles are not dated to the championship season, they are indeed the first pair the superstar ever wore, in the 1974 season, after his cornea was scratched in a game. After searching far and wide, the team came across the goggles, made by a French company, and ordered them for Kareem. Out of the many the team tried, this pair was the most comfortable and efficient and the team ordered several more pairs.

“After a certain amount of play the goggles got scratched,” said McBride. “Kareem discarded them for the next pair and I got these.”

As far as desirability goes, it seems fairly obvious to collectors why these pieces would be so prized.

“These three pieces, and everything that Dr. McBride has consigned to the auction, have everything you could possibly want,” said Chris Ivy, Director of Sports Auctions at Heritage Auctions. “They have a rock solid provenance – they’ve never left Dr. McBride’s possession and he is very well known in the NBA – and are associated with two of the greatest athletes to ever play professional sports, period, from an amazingly storied season. Things like this don’t come around often.”

For McBride, whose hustle and hard-work in his youth set him on his successful path as an adult, the auction is bittersweet, if an obvious decision.

“I’ve had them for 40 years and have enjoyed them every minute but I’m not young anymore,” he said. “I’d rather do something meaningful for my family by securing their future and donate to some important charities at the same time while ensuring these pieces are properly taken care of for posterity.”