The dominant center holds a special place in basketball lore, but only a select few occupy the same rarified air as Kareem Abdul-Jabbar. His star began its rapid ascent in the 1960s as a Harlem schoolboy then known by his given name, Lew Alcindor, while winning three straight New York City Catholic championships. A basketball legend was born.

After he landed at powerhouse UCLA, good things continued to come in threes for Alcindor, who was the key performer on a Bruins squad that won three consecutive NCAA championships from 1967 through 1969. In fairness to the towering center, he almost certainly would have claimed four titles if the collegiate rule barring freshman from playing varsity ball wasn’t in place during his first season at Westwood in 1966.

Alcindor graduated from UCLA as perhaps the greatest basketball player the nation had ever seen — and a commanding voice during the Civil Rights movement for a new generation of Black athletes. Fifty years later, the most important collegiate basketball ring in existence (estimate $200,000+), presented to Alcindor in commemoration of the three championships he won with the Bruins, is being made available to the public as part of Heritage Auctions’ Summer Platinum Night Sports Collectibles Catalog Auction  Aug. 29-30. 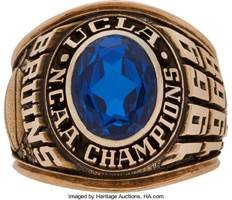 “Kareem Abdul-Jabbar is arguably the most significant athlete west of the Mississippi in American sports history,” Heritage Auctions Vice President Dan Imler said. “Three dominant national championships at UCLA, then the NBA’s all-time scoring leader with the Los Angeles Lakers – add to that fact that he was an early pioneer among athletes using their platform to promote social causes, and it’s virtually impossible to overstate his significance in the sports collectibles realm.”

A three-time First Team All-America who also earned a trio of tournament Most Valuable Player awards, Alcindor built another lasting legacy around social consciousness as the most prominent collegiate Black athlete to join in on a nationwide debate about boycotting the Olympics.

This treasure presents in NRMT condition, with a blue stone that commands the face of the ring, standing at center of raised text proclaiming “UCLA NCAA Champions.” The ring’s left shank features the “Bruins” nickname above a figural basketball, while the right shank records the three seasons of dominance that Alcindor delivered to the City of Angels.

Sourced directly from Abdul-Jabbar with his signed letter of provenance, this exceptional piece of historical intrigue and basketball brilliance serves as a striking modern-day reminder of the outsized role that sports has played and continues to play in matters of social justice.

For images and information on these and the rest of the 761 lots in the auction, visit HA.com/50029.