The gloves are on, and it’s time for boxing fans to choose their corners and bid aggressively on a fantastic selection of championship boxing memorabilia in Grey Flannel’s June 5 Summer Games Auction. Fifty-seven lots in the 613-lot major sports auction are devoted exclusively to professional boxing, with the centerpiece being an archive of career collectibles that the consignor obtained directly from Larry Holmes.

Several offered items from the Holmes archive will transfer with an irrefutable form of provenance that is, in itself, a valuable collectible – a photo of Holmes holding the actual item. Additionally, all Holmes lots will be accompanied by a letter of authenticity (LOA) from Grey Flannel Auctions. 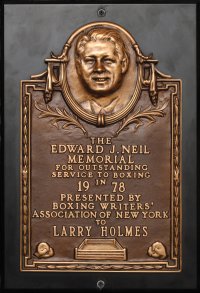 Some of the greatest moments in Larry Holmes’ stellar boxing career will come to life in Grey Flannel’s June 5 sale. Among the top highlights of the unique and very personal Holmes archive are Lot 610, the Edward J. Neil Memorial plaque awarded in 1978 by the Boxing Writers’ Association of New York ($2,500 reserve), and Lot 613, the WBC Heavyweight World Championship Belt Holmes earned that same year when he defeated Ken Norton at Caesar’s Palace in Las Vegas ($2,500 reserve). The impressive green leather championship belt with a massive, decorative center medallion emblazoned “World Champion W.B.C.” is signed by Holmes in black felt-tipped marker: “My original WBC belt – Larry Holmes.”

Few boxers have achieved a record that can match that of the mighty “Easton Assassin.” During his professional years, Holmes won 69 of 75 fights and scored 44 knockouts. He was World Heavyweight Champion from 1978 through 1985 and was inducted into The International Boxing Hall of Fame on June 8, 2008. His boxing odyssey can be tracked, one opponent at a time, through the items in Grey Flannel’s auction.

In 1968, Holmes – then 19 years old – entered the ring for the first time as an amateur. Three years later, he was sparring with the great Muhammad Ali. In 1973, Holmes turned professional. He and Ali would cross paths again, as evidenced by Lot 596, an oversized, hand-painted Everlast boxing glove used in 1980 to promote “World Heavyweight Champion Larry Holmes vs. Challenger Muhammad Ali” in a Las Vegas title fight. The jumbo gold-colored glove has a $500 auction reserve.

Lot 607, the gloves Holmes wore – and later autographed – in his June 19, 1992 World Heavyweight Championship fight against then-reigning champ Evander Holyfield are offered together with a framed ticket from the match and a color photo of the two boxers going at each other in the ring. The lot requires a minimum bid of $1,000.

Lot 608, the red and white personalized Everlast trunks Holmes wore in his Sept. 21, 1985 fight versus Michael Spinks are photomatched to the Sept. 30, 1985 cover of Sports Illustrated. A $1,000 reserve has been placed on this item.

“To own a championship belt from one of the greatest fighters in the history of the ring is a very rare offering to say the least,” said Grey Flannel Auctions President Richard E. Russek. “And for boxing fans to be able to bid on their pick of three Larry Holmes championship belts in the same auction is unheard of.”

Lot 605, a historical grouping of items documenting Holmes’ last professional fight – the autographed gloves, personalized robe and trunks he wore in a July 27, 2002 match against Eric “Butterbean” Esch – has a $2,500 reserve. 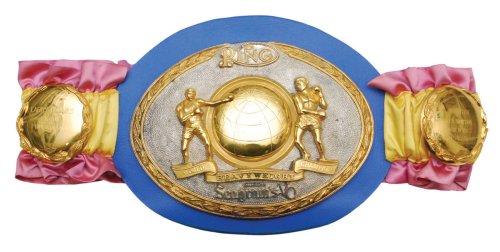 Holmes was no stranger to awards, and many are included in the June 5 auction. For example, Lot 579, his engraved 1978 World Boxing Council Boxer of the Year Award, which depicts a triumphant boxer standing over an opponent who is down for the count, is entered in the auction with a $500 reserve. Lot 583, his 1983 Victor Award presented by the National Academy of Sports Editors and Broadcasters, similarly has a $500 reserve.

The lineup of heavyweight boxing mementos continues with Lot 556, which is undoubtedly the most unusual item in the sale: a 16-inch-square handkerchief that came from the African-style robe Muhammad Ali wore prior to his Oct. 30, 1974 title fight against George Foreman in Kinshasa, Zaire. This event is famously known as the “Rumble in the Jungle.” Framed and matted to measure 27 by 27 inches, the handkerchief is actually an elaborate astrological chart based on Ali’s date and place of birth. The chart was hand-drawn onto the cloth in black ink by British psychic and astrologer Frederic Davies and then sewn into a secret panel in the hem of the robe by designer Michael Fish. The handkerchief’s existence was known only to Ali and Fish. At the top of the handkerchief, Davies had written his prediction that Ali would prevail over the then-undefeated Foreman. Indeed, Ali fulfilled the prophecy with an eighth-round knockout. A phenomenal “witness” to the fight that some have called “the greatest sporting event of the 20th century,” the astrological chart requires a minimum bid of $10,000.

The ferocious “Iron” Mike Tyson’s 1986-1990 autographed WBC World Championship belt with a handsome center medallion featuring the flags of dozens of nations is presented in a shadowbox and accompanied by a LOA from JSA validating the signature. Entered as Lot 568, it has a $2,500 reserve.

Other important gloves include Lot 557, a pair whose left glove was signed on Dec. 19, 1963 by both Cassius Clay (later Muhammad Ali) and one of his greatest influences in boxing, Joe Louis. With a JSA LOA, the lot requires a bid of $5,000. Lot 571, the gloves worn by Roy Jones, Jr. in his Aug. 7, 1997 fight against Montell Griffin, have a $1,000 reserve. Jones’ fight-worn and autographed 1988 Seoul Olympics qualifier gloves with LOA from the boxer’s glove man have a $500 reserve, as does the US Olympic Team ring awarded to Jones.

No other signed memento in the June 5 auction can match Lot 567 for its humor. It is the red and white satin embroidered robe that Tony “T.N.T.” Tubbs wore in his March 21, 1988 World Championship fight versus Mike Tyson at the Tokyo Dome in Japan. Tubbs signed the back of the robe in red ink, adding the inscription: “I Went Down in 2 Rounds Like Don King Told Me.” In fact, whether intentional or not, Tubbs did hit the mat in the second round. The robe is accompanied by several photos of Tubbs signing and inscribing the robe, as well as a LOA from JSA for the signature. Reserve: $1,000.

Bidding in Grey Flannel’s Summer Games Catalog Auction will close on June 5, 2013. All forms of absentee bids are accepted, including by phone and online through Grey Flannel’s website at www.GreyFlannelAuctions.com.

Printed catalogs are free to all registered bidders while supplies last. The fully illustrated online catalog can be viewed at www.GreyFlannelAuctions.com. For additional information, call 631-288-7800, ext. 223; or email info@greyflannelauctions.com.