next auction will begin early January 2015 and will be closing on Friday February 6th. We are specifically seeking:  Non-Sports Items and Any Collectible Items with a value in excess of $100,000. High profile and rare items will be advertised extensively during the auction on all media outlets (television, social media, etc.). 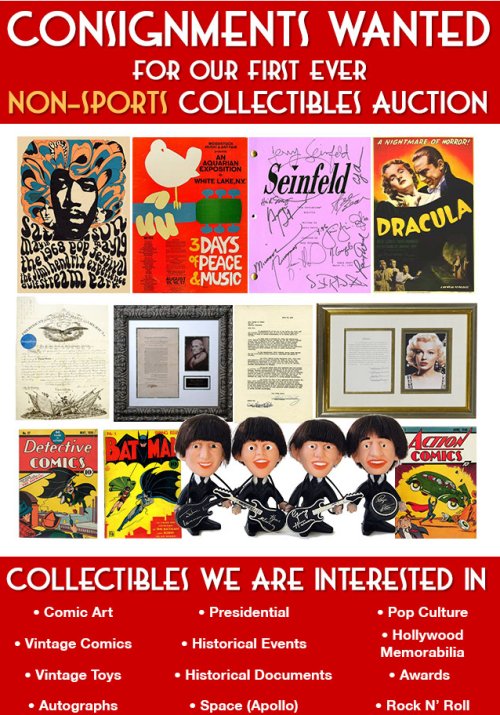 Goldin Auctions’ marketing and promotion of our auctions are second to none.
Besides absolutely blanketing every hobby website and publication with advertisements (print, email and web), we target both sports fans and the casual collector. Thus far in 2014, we have placed over 100 full pages worth of advertisements in publications, such as Robb Report, Dupont Registry, New York Daily News, Los Angeles Times, Philadelphia Inquirer, Haute Living, Beach Homes, Florida Sun Sentinel, and numerous others. Also, Ken Goldin has personally appeared on CNBC five times, Bloomberg four times, Fox Business three times, and ESPN ‘Mint Condition’ nine times all in the past 10 months. Our auctions and items have been mentioned in over 1,000 articles this year.

The outcome of these marketing efforts is more public awareness, registered bidders and auction viewers, resulting in an increased number of bids and higher realized prices for our consignors.

Check out a sampling of our past auction results:

Consignment deadlines for this auction are as follows:

Please note these are the dates the item actually needs to be in our building, not the date on the contract or ship date!!

ALSO KEEP IN MIND IT IS POSSIBLE WE COULD HAVE ENOUGH INVENTORY PRIOR TO THESE DEADLINES, SO THE EARLIER YOU GET YOUR ITEMS IN, THE BEST CHANCE THERE IS TO BECOME PART OF THE FEBRUARY 6th AUCTION.

Our next auction will open for online bidding early January and will close on Friday February 6, 2015. The auction will end five days after the Super Bowl and will run during all of the NFL playoff games. We point this out because while we are baseball 365 days a year at Goldin Auctions, this time frame is a great time to offer football items. We are looking for high profile items as well as a few extremely high end items, and this is a great opportunity to consign your high end football items.

If you are interested in consigning anything to the January auction, Please contact us immediately with a list of your potential consignments prior to sending them to us.

Please email info@goldinauctions.com or call our office 856-767-8550 9am-6pm Eastern with respect to consignments. If you have previously consigned to us, please contact your consignment director directly.