Memory Lane’s Spring auction is in progress with bidding on the more than 1000 lots underway and concluding on Saturday, May 5, 2012. Collectors have a chance to chase down the elusive Wagner card in Memory Lane‘s spring ‘Holy Grail Auction’.  For a free auction catalog and to register and bid, visit MemoryLaneInc.com or call 877.606.LANE (5263).  Highlights included: 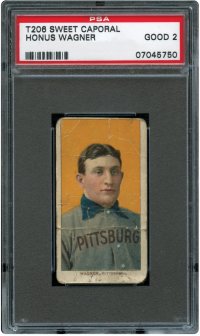 The most famous trading card of all-time T206 Honus Wagner Sweet Caporal PSA 2 Good. The starting bid on the Wagner card will be $550,000.

T206 collectors will tell you that the Eddie Plank card from that same set is often just as difficult to find as the Wagner. Memory Lane will offer a clean PSA 4 example of the Plank card in the auction, which closes May 5.

There are numerous other cards in the auction that are staples on the want lists of advanced collectors. An extremely rare W600 Sporting Life Christy Mathewson in uniform (PSA 3) —another very rare card from the early 20th century.

For collectors of vintage hockey cards, a high end example of the 1966-67 Topps USA Test Bobby Orr would certainly fall into the ‘holy grail’ category. MLI offers an impeccable near mint plus example.

Collectors of post-War era baseball cards will find a copy of the iconic ‘holy grail’ of post-War cards, the 1952 Topps Mickey Mantle, this one a PSA 5, which should make it within reach of a large number of dedicated collectors. An amazing group of graded Mantle cards running the entire gamut of his big league career and a special binder with more Mantles are also among the lots .

As usual, Memory Lane offers dozens of card collecting’s most highly desirable cards, many in 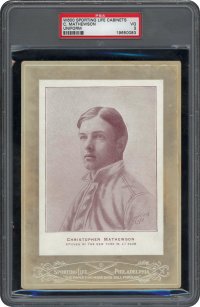 ultra high grade. Babe Ruth cards remain extremely popular and there are several in the auction including a 1933 Sport Kings #2 in PSA 7, a 1932 U.S Caramel (PSA 6), a 1933 Goudey #53 (PSA 6) and a 1951 Connie Mack All-Stars (NM+). There is an interesting autographed Ruth piece—a signed mini bat promoting ‘Babe Ruth Athletic Underwear’. 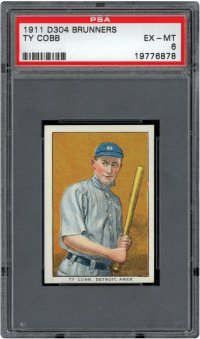 An unusual number of gem mint PSA 10 graded cards are offered including a run of 1970s Topps Hall of Famers in both baseball and football.