Goldin Auctions October Legends Auction celebrates the 75th anniversary of the Baseball Hall of Fame, the final season of Derek Jeter’s extraordinary career, and features the exclusive and rare Mike Schmidt collection. The October Legends Auction which is in progress and concludes on November 1st. Below are some of the items that attracted the most attention during our first week of bidding.

October Legends Auction Closes November 1st, 2014 @ 10 PM Eastern, at which time ‘extended bidding’ will commence for those that have bids placed on that particular lot. 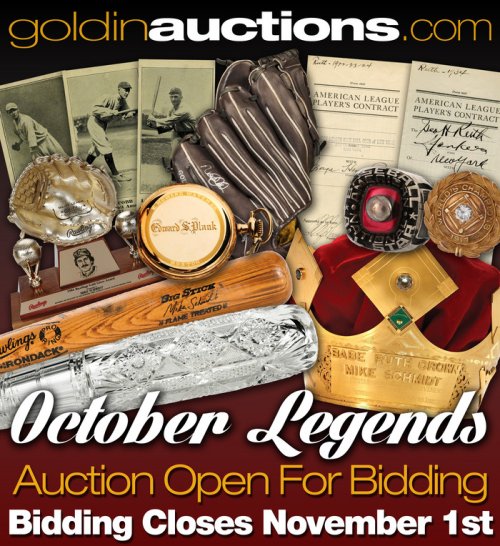 If you have forgotten your user name and/or password please click on the link in our registration page for lost user ID and passwords. If you are still unable to successfully log on please feel free to contact us and we will be happy to help.

If you have any questions please call 856-767-8550 or email info@goldinauctions.com

There is no cost, so please register today!