Goldin Auctions is offering collectors two chances to bid upon a rare collection of sports memorabilia in the 2015 Goldin Auctions Summer Auction  which concludes on August 8th,  at www.GoldinAuctions.com

To see the  lots of sports, entertainment, historical and pop culture memorabilia, or to register for the auction and receive a free catalog, visit www.GoldinAuctions.com.

Fresh on the heels of its record breaking live auction at the National Sports Collector’s Convention on July 31 that generated more than $3 million in sales, the second half of the 2015 Goldin Auctions Summer Auction offers a wide array of rare and unique sports, entertainment, historical and pop culture memorabilia through August 8th at www.GoldinAuctions.com. Among the 1,000+ lots still up for bids are a rare 1932 Babe Ruth game-worn cap; Andre Dawson’s 1987 N.L. MVP Award; signed checks from the inaugural Baseball Hall of Fame Class; game worn jerseys from Barry Bonds, Derek Jeter, Mariano Rivera and much more.

For detailed descriptions of the lots or to register for the auction, visit www.GoldinAuctions.com. Additionally, Goldin Auctions is currently accepting consignments for its October Auction. To consign an item, call 856-767-8550 or email info@goldinauctions.com.

“The live portion of our annual summer auction was a huge success with very active bidding at the National Sports Collector’s Convention and by our phone and internet customers,” said Ken Goldin Founder of Goldin Auctions. “There are still many great deals available to collectors in the online portion of this auction through August 8th.”

Although there are more than 1,000 lots up for bids representing sports, entertainment, historical and pop culture, the 2015 Goldin Auctions Summer Auction offers one of the most impressive collections of baseball memorabilia ever assembled. In addition to personal collections from Hall of Famers Mike Schmidt and Andre Dawson, the auction also features five Gold Gloves, a rare Babe Ruth game worn Yankees cap, Christy Mathewson’s game used and signed 1905 World Series bat, a 1952 Topps Mickey Mantle rookie card graded PSA8, and a dozen game used bats that are each expected to fetch more than $10,000.

Some of the marquee collections including: 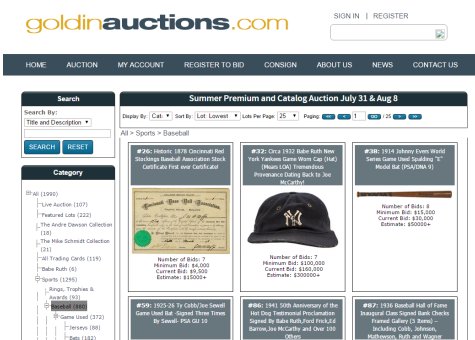