Goldin, the leading marketplace for trading cards, collectibles and memorabilia, announces that a rare LeBron James trading card has broken industry records at the company’s October Elite Auction, which closed this past weekend. An autographed LeBron 2003-04 UD “Exquisite Collection” Rookie Patch card graded NM-MT+ 8.5 by BGS, sold for an auction high of $2.46 million and set a new all-time record price for this card in any grade.

The October Elite Auction included several record-breaking items and huge bids. One of the marquee items of the auction was a Serena Williams 2003 NetPro International Match Worn Apparel Rookie Card which sold for $44,280, setting a new all-time record for any women’s sports card. Williams’ card broke the record previously held by a Mia Hamm card, which sold for $34,440 through Goldin in June. Joining LeBron in eclipsing the $2 million threshold was a 1952 Topps #311 Mickey Mantle Rookie Card, graded PSA NM-MT 8, which sold for $2,029,500. Also notable, a 1971 Topps #156 Terry Bradshaw Rookie Card, which has a flawless state of preservation at a PSA GEM MT 10 grade and is one of just three in the world of its caliber, sold for $430,500, smashing the previous record. In total, the auction closed $39 million in sales. 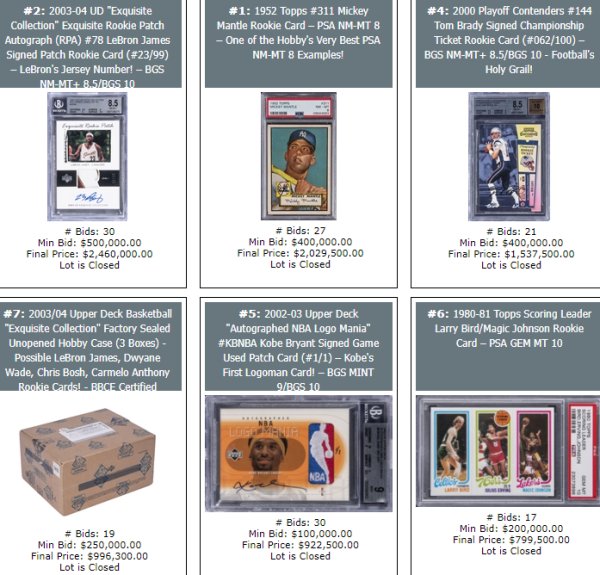 “The enthusiasm that we are watching unfold across collectible categories, sports, teams and athletes is incredible and unlike anything we’ve seen before,” said Goldin Executive Chairman and Founder Ken Goldin. “Whether it’s baseball, basketball, soccer, or even tennis, the passion that collectors are exhibiting for vintage and modern items is resulting in record prices being broken all the time and we couldn’t be prouder to be a part of it.”

“Serena Williams is the one of the GOATs and the record-breaking sale of her card is reflective of her unmatched professional career and enormous fan following. We’re thrilled to have sold her card for a new all-time high!” said Goldin Auction Director Dave Amerman. “Meanwhile, as LeBron James enters his 19th NBA season, he also continues to set records on and off the court. He is a living legend and collectors will always show up in hopes of picking up his rare trading cards and collectibles.”

The auction featured several rare, valuable and record-breaking items including:

Goldin has built a reputation as the trusted leader in trading cards, memorabilia and collectibles. So far this year, the company has already done over $325 million in sales. Goldin Auctions is actively accepting consignments for future auctions. To inquire about consigning items, email info@goldinauctions.com.

About Goldin:
Goldin is the leading marketplace for trading cards, collectibles and memorabilia. Founder Ken Goldin has sold more than $1.2 billion in memorabilia from many of the biggest names in sports, history and pop culture. The company routinely sets records for the most expensive trading cards and other memorabilia ever sold. Lifelong collectors and new hobbyists alike trust Goldin because the company professionally authenticates everything it sells. Goldin is the official auction partner of the Naismith Memorial Basketball Hall of Fame, The Major League Baseball Players Alumni Association, The Jackie Robinson Foundation, and the Babe Ruth Birthplace and Museum. Learn more at GoldinAuctions.com, and on Twitter and Instagram.