Featured in the Legendary Auctions February 27–28 Catalog Auction is a special offering of 1903 E107 Breisch Williams cards from The Chris Sullivan Collection. View these amazing cards and the entire auction at www.legendaryauctions.com .

I will never forget the Spring of 2004, when I had my first opportunity to meet Chris Sullivan. After spending an evening with him—selecting consignments for an upcoming auction—he pulled out an album from his closet and showed me what turned out to be about three-fourths of the elusive E107 Breisch Williams baseball card set. He had been working on the set in that binder for almost two decades. From that point on, every conversation with Chris ended in the question, “Are you ready to part with those little black-and-white cards yet?” Eight years later—with the project now being dozens of cards closer to completion, and with a multitude of upgrades bringing the work nearer than ever to perfection—I got the call: he was finally ready to let others enjoy these rare gems. 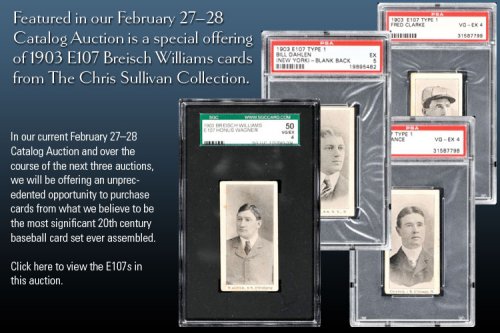 For a long time an avid Boston Red Sox fan, Chris Sullivan resides in a quiet suburban Massachusetts town, and his desire to begin collecting Breisch Williams cards was kindled by the numerous Red Sox players depicted in the E107 set. A decade before he commenced the seemingly endless quest to obtain E107 subjects, Mr. Sullivan’s love for baseball-related collectibles was triggered by the classic T206 “Monster” issue, from which he began to acquire some of his favorite “Dead Ball Era” stars.

In our current February 27–28 Catalog Auction and over the course of the next three auctions, we will be offering an unprecedented opportunity to purchase cards from what we believe to be the most significant 20th century baseball card set ever assembled. From the perspective of rarity, as well as that of preservation quality, no individual enthusiast has ever started with a single card purchase and then tenaciously continued to construct a gallery of this magnitude—wherein the graded holdings surpass the industry’s next-best assembly by a substantial margin. As fellow hobbyists, we hope that you will enjoy this presentation and join us in congratulating Chris Sullivan for his incredible achievement of compiling all of the 147 players confirmed in E107 (including a”Type II” Lajoie), plus four additional Type II duplicates and seven “Type I” duplicate player/team variations. Click Here to read more about this amazing collection.