In Baltimore on Friday, an overflow crowd of more than 200 client-collectors attended Legendary’s 4th Annual Live Auction, which showcased 62 extraordinary offerings and exceeded all expectations by generating more than $1.7 million in total revenue. We were blown away to see our customer base come out in droves to enjoy a memorable night, show their support, raise their bid paddles and, ultimately, stake claim to some of the hobby’s finest treasures. What’s more, very few proxy bids held as the vast majority of action instead took place in the electrifying atmosphere of the elbow-to-elbow auction room.

Fittingly for the Charm City, it was native Baltimorean Babe Ruth who stole the show. Several minutes of feverish bidding elevated the “Extremely Rare 1915 Studio Photograph of Babe Ruth and his Father in their Baltimore Tavern” (Lot #17) to a record price of $54,970, more than tripling the initial estimate of $10,000-$15,000. 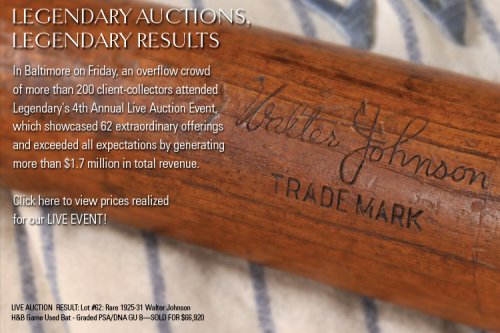 Another milestone occurred when preeminent baseball artist Dick Perez (of Perez-Steele and Diamond King fame) received the highest price ever paid for his work. The “Monumental ‘Cobb Sliding’ Oil-on-Canvas Scene – Flagship Piece in the Conlon Collection by Dick Perez” (Lot #8) peaked at an all-time-high hammer price of $24,498. And as our special guest, Dick—whose towering hobby stature had been felt throughout his promotional appearance at Legendary’s National Convention booth that day—received a rousing ovation on the auction floor. (Stay tuned for more of Perez’s original Conlon artworks to come.)

In addition, the KENT FEDDEMAN WASHINGTON NATIONALS/SENATORS COLLECTION was extremely well-received, with 9 lots surpassing their $150,000-$200,000 combined estimate to achieve over $225,000 in sales! Anchoring Kent’s impressive assembly were the night’s climactic final two items—Walter Johnson 1925-31 Game-Used Bat ($66,920) and Walter Johnson 1939 Hall of Fame Induction Gold Watch ($56,763)—both of which helped end the auction on a soaring crescendo.

Legendary Auctions would again like to extend a heartfelt thanks to all of our valued consignors and bidders for yet another highly successful auction event. And we look forward to amplifying this momentum in our robust August 29–30 Catalog Auction of more than 2,200 new offerings!