Legendary Auctions November 28–29 Catalog Auction i snow open for bidding.  With Thanksgiving next week, Legendary Auctions decided to open the bidding a little early to give everyone a chance to start the auction process. In addition to the Dreier Collection and the Kent Feddeman Collection, the Legendary November 28–29 Catalog Auction presents an incredible offering of collections from advanced, long-time collectors and their families.

The Phil Esposito Collection
Spanning from Phil Esposito’s childhood in the 1940s up through his franchise ownership in the 1990s, the collection features heavy emphasis on Espo’s 1969-74 glory years with the Boston Bruins, 1972 Summit Series world championship, and 1979-81 swan-song seasons.

All of the fun-filled lives and times of Phil Esposito are on full glorious display in this collection. Click here to read more about the Phil Esposito Collection. 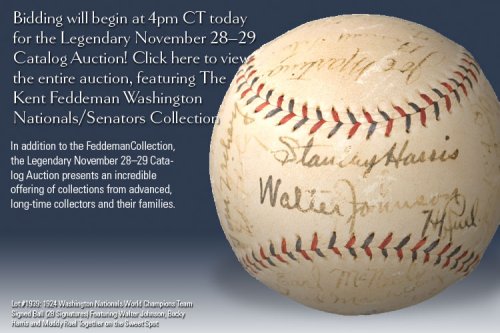 Growing up in Hudson, Massachusetts, I loved the Red Sox and hated the Yankees. As a kid, I’d trade any Mickey Mantle card for Ted Williams. My mother threw out all my cards when I joined the U.S. Navy.

I began collecting again in the early 1980s. As an adult, I still loved my Red Sox and Ted Williams, but also had read a lot about baseball’s early days of baseball and became intrigued with pre-war thru 1950s cards and memorabilia. My focus quickly zeroed in on Babe Ruth and Mickey Mantle… Click here to read the whole story and view The Satellite Beach Collection.

The George Burke/George Brace Original Negatives Collection
The longest-running operation of all the great early photographers, George Burke and George Brace covered baseball in one form or another for the better part of the 20th century—from 1929 to the 1990s. Their tenure had an auspicious beginning, to say the least. In 1929, Cubs manager Joe McCarthy and catcher Gabby Hartnett sought out the ballclub’s previous photographer. They could only remember his last name, Burke, so they looked him up in the phone book. A listing leapt out at them: studio photographer George C. Burke, whose office was located near Wrigley Field. Thus began the baseball photography career of George Burke, who had no prior sports experience, and thus ended the career of photographer Francis Burke—the Cubs’ time-honored official cameraman and an unwitting victim of mistaken identity.

All of the original acetate negatives in this catalog section come directly from the family estate of the George Burke/George Brace Collection. Burke’s negatives center on the 1930s-40s, while Brace’s zero in on the 1950s. Ruth, Gehrig, Johnson, Foxx, Feller, Dean, DiMaggio, Williams, Wagner, Greenberg, Robinson, Mays, Aaron, Clemente—the biggest marquee names of the day are featured…and so many more. Not only are the images quite visually extraordinary across the board, but many of them are also exceedingly rare or one of a kind—not to mention possibly never before seen, since not all of Burke and Brace’s photos would have reached publication. It is important to note as well that historic original negatives of this quality can be both collected on their own worthy merits and utilized to reproduce crystal-clear modern prints. Click here to read more about this collection.

Selections from the Personal Collection of Phil Rizzuto
Phil “Scooter” Rizzuto was a beloved player, announcer and key member of the Yankee family for over half a century. The following offering came directly from the Rizzuto family warehouse. The collection is a cross section that includes everything from vintage team signed balls, awards, original art and other Yankee and Hall of Fame Induction ephemera. Each lot comes with an LOA from the Rizzuto family attesting to its origin. Click here to view The Phil Rizzuto Collection.

We will continue to auction the remainder of Alan’s collection throughout the rest of this year and next, and we again offer our sincere thanks to Lorraine and Monica Getz, who have entrusted us to handle their father’s monumental collection.
Click here to view the Alan Getz Collection.

The Immortals by Dick Perez
For the world’s preeminent baseball artist Dick Perez, The Immortals: An Art Collection of Baseball’s Best is literally his life’s work.

Hall of Fame Art Postcards (1980), Great Moments (1985), Celebration (1989), Masterworks (1990), Diamond Kings (1982-1996)—all of these famed Perez classics and more are featured in one of the most lavish luxury tomes ever to hit the shelves of bookstores, libraries and museum gift shops.

Singlehandedly produced, designed and published by Perez himself in 2010, The Immortals showcases more than 1,400 individual artworks in a variety of media (oil, acrylics, gouache, watercolor, pen and ink, and charcoal). It is highlighted by every Cooperstown inductee and over 400 previously unpublished renderings, of which 338 had never been seen before.

Now Legendary Auctions proudly presents an exclusive selection of 42 original portraits from The Immortals. Hall of Famers across the board, these time-transcending figures span all seven of the book’s defining eras. Click here to read more about this special offering.