Legendary Auctions is extremely pleased to announce the sale of the Kent Feddeman Collection, and we believe the nine epic offerings featured in our August 3rd Live Auction Event will serve as the perfect appetite-whetting taste of the feast yet to come in Kent’s stand-alone November 2012 and February 2013 catalogs.  The Full Preview is Now Online—The event will be held at The Maryland Science Center n Baltimore, MD, 8:30 pm, Friday, August 3, 2012. Online proxy bidding begins July 23. For event reservations please call (708) 889-9380. Space is limited. 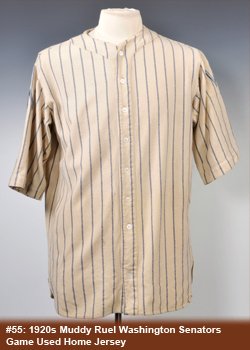 The Kent Feddeman Collection
Today, nobody but nobody has more heart and more soul for the Washington Nationals/Senators than Kent Feddeman. Born and raised in D.C., Kent spent every waking moment of adolescence in devotion to his beloved Nats — whether hopping a trolley to Griffith Stadium; sneaking down to the box seats by the dugout; tuning in to radio and TV broadcasts; attending spring training in Orlando with his brother and parents; or emulating his idols, Sievers and Jose Valdivielso, on the Hearst Playground ball field. Kent also had the good fortune to develop friendships with “Valdy” and pitcher Walter Masterson, and he learned to throw a wicked curve from none other than curveball master Camilo Pasqual!

Only much later, in middle age, did Feddeman’s passion for Nationals collectibles catch fire. Ironically, the spark came from a Yankee foe: Mickey Mantle. Back during the summer of 1956, 11-year-old Kent seized a postgame opportunity to jump Griffith Stadium’s sideline railing, dash inside the visitor’s dugout, swipe Mantle’s batting helmet, dodge an equipment manager, and then hightail it out of there by using chair backs as stairs. It was more of a juvenile daredevil stunt than savvy collecting tactic, and so as Feddeman grew older, he innocently put the helmet in storage and forgot about it.

Fast forward to 1987. Feddeman, by now a successful CPA, rummages around in his attic with a close friend, pro golfer Lanny Wadkins, on the hunt for a set of clubs. Instead they come across Mantle’s helmet. As chance would have it, Wadkins knows the Mick personally and has plans to hit the links with him. So he takes the helmet along and eventually returns it to Feddeman with the handwritten inscription, “To Kent – Nice Catch, Mickey Mantle.” Wadkins also recounted how Mantle had smiled and said, “Hell, I remember that game. We were all rooting for that kid to get away.”

Feddeman was elated — and hooked. He started going to collector shows, getting to know dealers, doing his homework, and buying up all the best 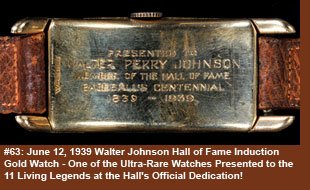 Nats memorabilia around, from photos to autographs to advertising pieces to game-used uniforms and bats. And he zeroed in on the franchise’s four high-water marks : 1) The 1924 World Series championship; 2) The 1925 American League pennant; 3) The 1933 American League pennant; and 4) The career of the Big Train, Walter Johnson. Over the next two decades, Feddeman succeeded in amassing not only the far-and-away finest Washington Nationals/Senators collection, but also one of the blockbuster world-class collections devoted to any single team.

Now, living in Florida, Kent has decided to part with his many National treasures. “The passion hasn’t left me,” he says. “But it’s time for my pieces to be enjoyed by other people — especially those avid fans and collectors in the D.C. area. There’s an important link between the current Nationals team of Bryce Harper and Stephen Strasburg, and the old Nats legacy of Walter Johnson, Bucky Harris and Goose Goslin. There’s a passing of the torch. For example, you can see historical photos of those championship Senator teams hanging at Nationals Park today. And my dear friend Hank Thomas, who’s Walter Johnson’s grandson, has thrown out the ceremonial first pitch there. And also the modern Nationals use the same swirl ‘W’ logo of the 1960s expansion Senators. I couldn’t be happier that young fans these days worship the Nats just like I did once upon a time.”

#63) June 12, 1939 Walter Johnson Hall of Fame Induction Gold Watch – One of the Ultra-Rare Watches Presented to the 11 Living Legends at the Hall’s Official Dedication! 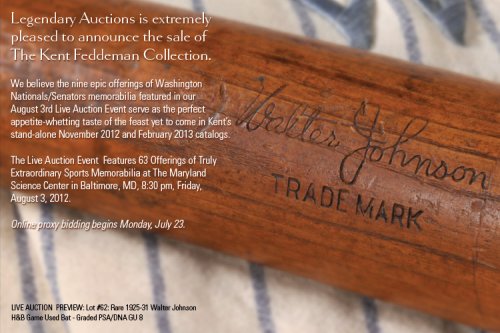