Legendary Auctions is proud to announce that hockey icon Phil Esposito has chosen Legendary Auctions for the sale of his power-packed personal collection of game equipment, awards, rings, autographs and artwork. This major collection will provide the centerpiece for a significant Hockey offering in our November 2012 Catalog Auction.

THE ESPOSITO COLLECTION
Spanning from Phil Esposito’s childhood in the 1940s up through his franchise ownership in the 1990s, the collection features heavy emphasis on Espo’s 1969-74 glory years with the Boston Bruins, 1972 Summit Series world championship, and 1979-81 swan-song seasons. 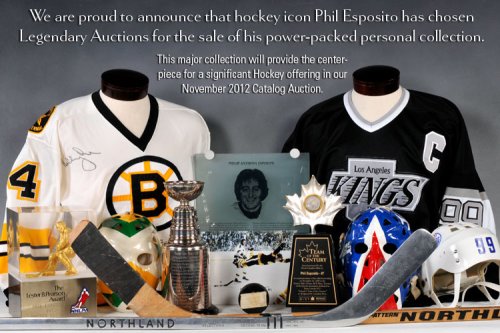 All of the fun-filled lives and times of Phil Esposito are on full glorious display in this forthcoming collection.

Do you have significant Hockey memorabilia you want to consign to this auction? We are always accepting consignments for our upcoming auctions. To partner with an auction house dedicated to maximizing the value of your fine collectibles, visit www.legendaryauctions.com or call us today at (708) 889-9380.