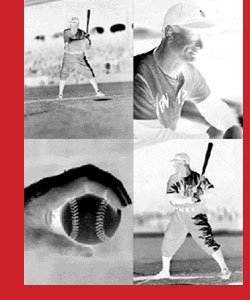 The longest-running operation of all the great early photographers, George Burke and George Brace covered baseball in one form or another for the better part of the 20th century—from 1929 to the 1990s. Their tenure had an auspicious beginning, to say the least. In 1929, Cubs manager Joe McCarthy and catcher Gabby Hartnett sought out the ballclub’s previous photographer. They could only remember his last name, Burke, so they looked him up in the phone book. A listing leapt out at them: studio photographer George C. Burke, whose office was located near Wrigley Field. Thus began the baseball photography career of George Burke, who had no prior sports experience, and thus ended the career of photographer Francis Burke—the Cubs’ time-honored official cameraman and an unwitting victim of mistaken identity.

All of the original acetate negatives in this catalog section come directly from the family estate of the George Burke/George Brace Collection. Burke’s negatives center on the 1930s-40s, while Brace’s zero in on the 1950s. Ruth, Gehrig, Johnson, Foxx, Feller, Dean, DiMaggio, Williams, Wagner, Greenberg, Robinson, Mays, Aaron, Clemente—the biggest marquee names of the day are featured…and so many more. Not only are the images quite visually extraordinary across the board, but many of them are also exceedingly rare or one of a kind—not to mention possibly never before seen, since not all of Burke and Brace’s photos would have reached publication. It is important to note as well that historic original negatives of this quality can be both collected on their own worthy merits and utilized to reproduce crystal-clear modern prints. Click here to view the entire offering of negatives.

Boston Red Sox Game Used Jersey Collection
This fresh-to-the-hobby collection comes to us from a consignor whose father befriended many baseball scouts in western Pennsylvania during the 1970s, one of whom received the jerseys/pants from the Red Sox clubhouse during spring training. Our consignor’s father purchased the uniforms from this scout (whose name and years of tenure are now lost due to the father having passed away in 2009), and then the family retained them in storage in Punxsutawney, PA, for the past almost three decades.

The Red Sox of the late 1960s and early 1970s were managed by Dick Williams and then Eddie Kasko, and they finished in 2nd or 3rd place from 1969 through 1972. Bright and clean overall with light to moderate game use, these attractive garments feature highly displayable McAuliffe labels sewn together in tandem with the manufacturer, season and size. All home jerseys exhibit a 7-button front, “Red Sox” slightly arched in old English red on midnight navy felt, and the club’s slash numeral font style on the verso in identical materials. Click here to view the entire Collection. 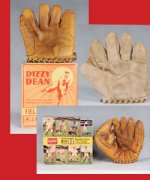 One of the finest galleries of player endorsed store model gloves ever assembled was compiled by Texas collector John Graham. Focused on condition as well as completeness, his amazing “finds” were drawn together to form a museum-caliber trove of astonishing breadth. (His diligence in seeking out and acquiring the most exceptional items was gentlemanly in nature, but nevertheless unrelenting.) Consisting of the most comprehensively representative and highest-quality material imaginable – including a mind-boggling 85 of the 88 known pre-war glove models endorsed by Hall of Famers (plus Joe Jackson) – Graham’s collection served as the resource for simply incredible displays. (These are pictured in Graham’s 2010 book, Baseball Gloves – Store Model Gloves from 1880’s to 1940’s – From the Collection of John Graham, which also acts as an invaluable, pictorial reference work in full color.) 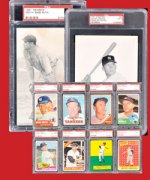 “Growing up in Hudson, Massachusetts, I loved the Red Sox and hated the Yankees. As a kid, I’d trade any Mickey Mantle card for Ted Williams. My mother threw out all my cards when I joined the U.S. Navy.

I began collecting again in the early 1980s. As an adult, I still loved my Red Sox and Ted Williams, but also had read a lot about baseball’s early days of baseball and became intrigued with pre-war thru 1950s cards and memorabilia. My focus quickly zeroed in on Babe Ruth and Mickey Mantle” Click here to view the Satellite Beach Collection. 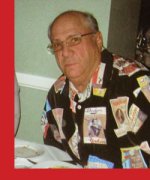 This is the final offering from Alan’s collection, and we again offer our sincere thanks to Lorraine and Monica Getz, who have entrusted us to handle their father’s monumental collection—it has been an honor. Click here to view the Alan Getz Collection.

Over the past 4 decades, Dick Perez has climbed every mountain there is to climb in the world of sports art—and summited a few Everests along the way. He served a distinguished tenure as Official Artist of the Baseball Hall of Fame, revolutionized the collecting hobby with his Perez-Steele card sets, blazed a trail with his Diamond Kings, conquered the luxury-book market with his dazzling retrospective The Immortals, and remains the longstanding Official Artist of the Philadelphia Phillies.

But this spring an altogether new adventure—and one which may provide the capstone to his sterling career—awaits Perez: His entrée into the prestigious New York Art Scene. Agora Gallery, a contemporary fine-art gallery in the heart of New York City’s Chelsea Arts District, will host an exhibition of Perez’s paintings from March 26-April 16, 2013. 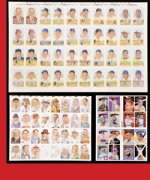 In preparation for the Agora exhibition, Dick has been reviewing his life’s work and revisiting his private archive of artifacts. Now, looking forwards rather than backwards, he has decided to part with the majority of his holdings relating to Perez-Steele, Donruss and Topps, so that collectors today can enjoy these rare pieces as much as he has over the years. Click here to view these offerings from Dick Perez’s Personal Archive.