Legendary Auctions is offering the ESPOSITO Collection, Spanning from Phil Esposito’s childhood in the 1940s up through his franchise ownership in the 1990’s, the collection features heavy emphasis on Espo’s 1969-74 glory years with the Boston Bruins, 1972 Summit Series world championship, and 1979-81 swan-song seasons. This is the final days of bidding for the Legendary November 28–29 Catalog Auction — Featuring the Phil Esposito Collection Headlining an Impressive Offering of Hockey Memorabilia and Cards. 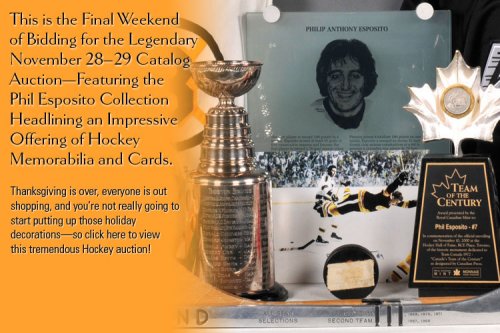 All of the fun-filled lives and times of Phil Esposito are on full glorious display in this collection.

Highlights of other fine Hockey Memorabilia and Cards offered in this auction include: