The auction will feature one-of-a-kind Ali memorabilia including an extremely rare poster promoting the Ali-Sonny Liston rematch fight scheduled for the Boston Garden in November 1964, and signed by Liston himself – the bout would be postponed due to Ali’s emergency hernia surgery and later moved to Lewiston, Maine, after Massachusetts authorities refused to sanction it over fears that promoters had ties to organized crime. The auction will also include a never-before-seen photo (original negative) of Ali displaying the poster.

Also featured in the auction is the largest collection of original negatives and vintage Ali photos ever to be offered including thousands from his boxing career, his 1974 “Rumble in the Jungle” championship ring, 1970’s Ali ring-worn shoes inscribed “Enjoy Life Its Later Than You Think,” and a spectacular collection of tickets and passes from his greatest fights headlined by the only known Ali-Berbick full unused ticket. 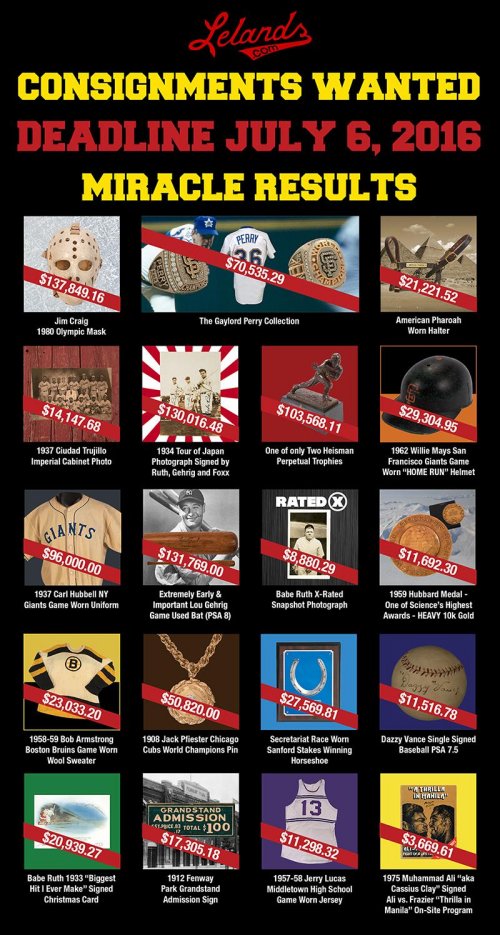 About Lelands
Lelands is the largest and most respected Sports Auction House in the world. We have handled such landmark collections as The Mickey Mantle Auction of the Greer Johnson Collection ($1.3M), The Harry M. Stevens Auction ($1.8M), and the famed Boston Garden Auction ($2M total sales). We have also auctioned important individual pieces like The Babe Ruth Sale Document ($99,000), Mickey Mantle’s 1960 Jersey ($111,100) and perhaps the single most famous transaction in sports memorabilia history, the sale of the infamous “Mookie Ball” to the actor Charlie Sheen for $93,500.
Over the past five years, Lelands has sold over $40 million worth of vintage sports memorabilia and cards.