Babe Ruth’s 1927 World Series Championship ring, the 1919 sale of Ruth from the Red Sox to Yankees contract (the Yankees copy of the deal) – the most important transaction in sports history and the day “The Curse of the Bambino” was born – headline the Lelands.com 1st Annual Invitational Auction, which closes June 30 and consists of a few hundred exceptional quality, high-value lots. 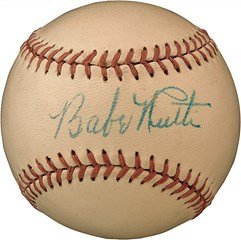 The Lelands.com Invitational Auction also boasts a priceless piece of golf history: the gold and silver medals won by pioneering U.S. golfer Chandler Egan at the 1904 Olympics – the last time the sport was played in the Games prior to its return last summer. The incredibly rare and significant medals were recently found in a bookcase in the former home of Egan’s daughter in northeast Ohio.

Additionally, the auction features an exceptional collection of horse racing memorabilia headlined by a 1972 Secretariat horseshoe from his maiden race and first win as well as a full set of eight nails worn by the legendary thoroughbred in the Belmont Futurity that year.

Lelands.com will also be auctioning off an array of vintage music and Americana memorabilia including a Bruce Springsteen “Born in the USA” stage-used guitar, a 1967 Sgt. Pepper’s Lonely Hearts Club Band fedora worn on the iconic album, a 1967 Pete Townshend “smashed” tour guitar, a 1952 Salvador Dali “Spheres of Gali” original pen and ink, and a 1967 Peanuts original art daily with Jose Peterson baseball content.

“From Ruth’s 1927 World Series ring to ‘The Curse of the Bambino’ pact, among other things, we believe this is the best quality sports auction since ‘The Barry Halper Collection,'” said Josh Evans, founder and chairman of Lelands.com. “We are excited to bring these historic, one-of-a-kind collectibles to auction.”

Auction is now open for bidding and closes June 30. For more information about the Lelands Invitational Auction, please visit www.lelands.com.