Lelands is proud to present one of the most exciting auctions of the year. With nearly 1,900 lots of the finest sports and non-sports memorabilia and cards, there’s certain to be something for everyone.  A 1915 World Series Champion Boston Red Sox team-signed baseball signed by Babe Ruth for his roommate, the personal collection of Steelers great and decorated Vietnam War veteran Rocky Bleier, and a multi-million dollar card collection including rare Ruth cards headline the Lelands Fall 2019 Classic Auction.  Bidding ends on December 6, 2019 at lelands.com.. 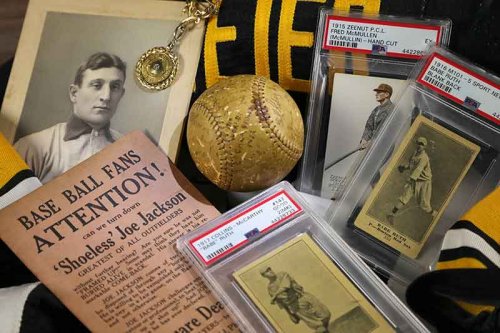 For the first time ever, Steelers icon and true American hero Rocky Bleier has made available his vast collection of memorabilia, which tells the story of his extraordinary life, from the football field, battlefield of Vietnam and back. Wounded in battle and told he’d never walk again, Bleier, who was awarded the Bronze Star and a Purple Heart for his military service, defied the odds and became a four-time Super Bowl winner with the Steelers. Headlining the collection is Bleier’s 1979 Super Bowl XIII Steelers game-worn helmet, his 1980 Super Bowl XIV game-used, signed jersey and an early to mid-1970s Bleier game-worn helmet.

The magnificent multi-million dollar card collection up for bid features rare Ruth cards and a stunning, fresh to the market 1917 Collins-McCarthy (E135) complete set. Among the spectacular Ruth cards is a 1916 M101-5 Sporting News blank back #151 rookie that is the only recognized Ruth rookie. Considered one of the most prized possessions in the card collecting hobby, the card depicts Ruth in pitching follow-through from his stint with the Red Sox. The Collins-McCarthy set, which comes with 20 PSA Graded, is believed to be the first complete set sold publicly. Also featured in the auction is an amazing 1911-36 Zeenut collection.

Another centerpiece of the auction is the greatest ever 1919 Black Sox Scandal to hit the auction block. Marking the 100th anniversary of the infamous scandal, the collection is headlined by a Holy Grail of baseball autographs: a “Shoeless” Joe Jackson signed voucher. Jackson was illiterate and rarely signed anything, making his autographs among the scarcest in sports. Also up for bid are 1919 World Series tickets, a 1919 White Sox season pass, Type 1 photos, handwritten letters, autographs and more.

Directly from actor Charlie Sheen, the auction also serves up the famed Cleveland Indians cap worn by Sheen’s Ricky Vaughan character in “Major League” and the actual screen and game-used pitched ball from the climactic scene where Vaughn strikes out his nemesis with a 101 mph fastball. Another timeless Sheen collectible up for auction is the standard military issue Timex watch worn by his Chris Taylor character in “Platoon.”

Another auction centerpiece is a tremendous horse racing trophy collection featuring trophies from several of the sport’s greatest horses. The Hirsch Jacobs collection of 39 trophies dates back to the early 1940s and comes from the estate of the legendary horse owner and trainer. The auction also includes a Secretariat 1973 Man o’War Stakes race-worn shoe and a 1973 Secretariat-used whip signed by Penny Tweedy.

If you want your stuff in these emails, we are now accepting consignments for our 2020 Spring Classic. Consignments, Outright Purchases, Cash Advances – Now in our fourth decade, Lelands is the original sports memorabilia auction house and the most respected and knowledgeable firm in the hobby. Contact Lelands.com – Call 732-290-8000 or e-mail Contact@Lelands.com.