Lelands has secured twenty incredible, high-quality jerseys directly from the Pittsburgh Steelers for auction this spring. A sneak peek of some of the items include game-worn jerseys from Jack Lambert (1977), Andy Russell (1975), Mel Blount (1976) and Rod Woodson (1992). One of the big stories of this collection is a 2004 Troy Polamalu game-worn jersey, which is the first jersey worn by the future Hall of Famer that the Steelers have ever offered in public auction. There are also more than half a dozen other items of memorabilia that the team has provided.

For the past several years, Lelands has been the exclusive auction house for vintage game-used jerseys and other memorabilia consigned directly from the Pittsburgh Steelers. Some of these latest jerseys have been in safe-keeping by the team for over a half a century and are just being offered to collectors now. Lelands President Michael Heffner appreciates the Steeler’s foresight noting, “Thank goodness the franchise had the thoughtfulness to save these precious pieces of sports history for collectors who will cherish them.” Past jerseys that Lelands has obtained from the Steelers have proven to be top-notch game-worn examples. 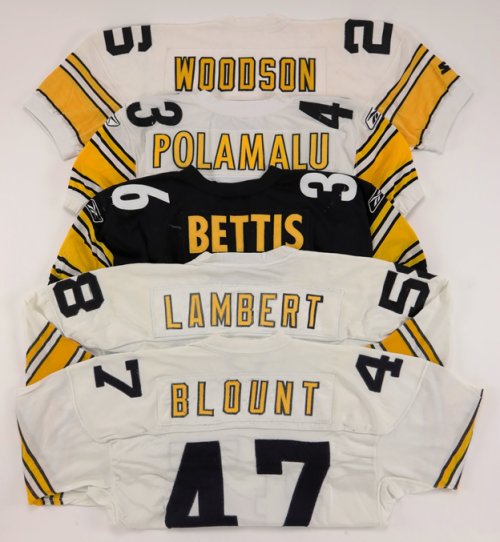 There are good reasons why Steelers memorabilia is some of the most sought after in the hobby. First, the Steelers are rich in football history and have assembled some of the finest and most colorful teams ever. Secondly, their fan base is and always has been one of the tops in the NFL, and the Steeler fans are active bidders for the franchise’s memorabilia. Finally, and specific to this collection, the fact that the jerseys come directly from the team have increased their value dramatically and have given collectors a once in a lifetime opportunity to acquire authentic game-worn jerseys.

Lelands is the original sports auction house and considered the premier appraisers and auctioneers in the hobby. Established in 1985, Lelands has been the auction house of choice for some of the most significant collections in hobby history. Lelands Spring 2020 Classic Auction will close on May 15, 2020. The deadline to consign your items to the auction is January 31st.